Home / BUSINESS / 42 Dead As Bus Falls In Gorge In Himachal Pradesh, Many Were Sitting On Roof – NDTV News

42 Dead As Bus Falls In Gorge In Himachal Pradesh, Many Were Sitting On Roof – NDTV News

As many as 44 passengers were killed and nearly 30 injured on Thursday after their bus fell in a gorge in the mountainous Kullu district of Himachal Pradesh, officials said. The number of deaths could rise as several passengers were sitting on top of the bus, reports said.

The private bus was filled with about 70 people when it plunged into a 500-foot deep gorge near the Dhoth Morh in Banjar tehsil of the district. The bus was on its way to Gada Gushaini, about 60 km from Kullu. 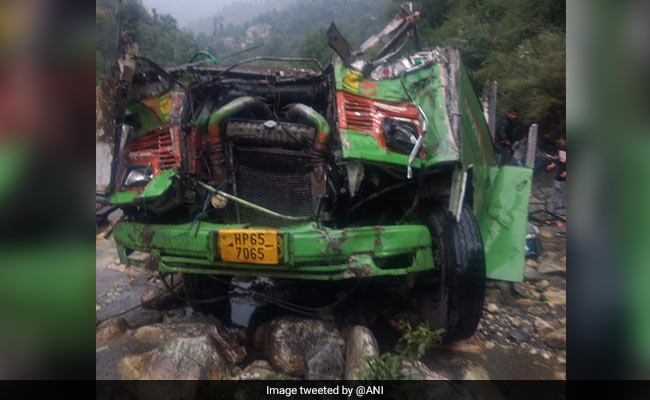 Kullu, Himachal Pradesh: The bus was completely crushed in the accident.

It appeared that having too many people onboard and reckless driving may have caused the accident, Sheetal Kumar, a government official told news agency PTI.

Television images showed the mangled remains of the bus near a stream at the bottom of the gorge as locals made human chains to help survivors cross it. The injured were taken to the Banjar Civil Hospital and the Kullu district hospital.

Deeply saddened by the bus accident in Kullu. Condolences to the families of those who lost their lives. I hope the injured recover soon. The Himachal Pradesh Government is providing all possible assistance that is required: PM @narendramodi

Most of the victims were residents of various areas in Kullu district. The district administration announced an immediate relief of Rs 50,000 each to the families of those killed and the injured.

Himachal Pradesh is prone to deadly accidents owing to its rugged terrain, with speeding and over-crowding adding to the safety hazards. According to government data analysed by advocacy group SaveLIFE Foundation, around 1,200 people have died each year from road accidents in the state between 2014 and 2017.

42 Dead As Bus Falls In Gorge In Himachal Pradesh, Many Were Sitting On Roof – NDTV News