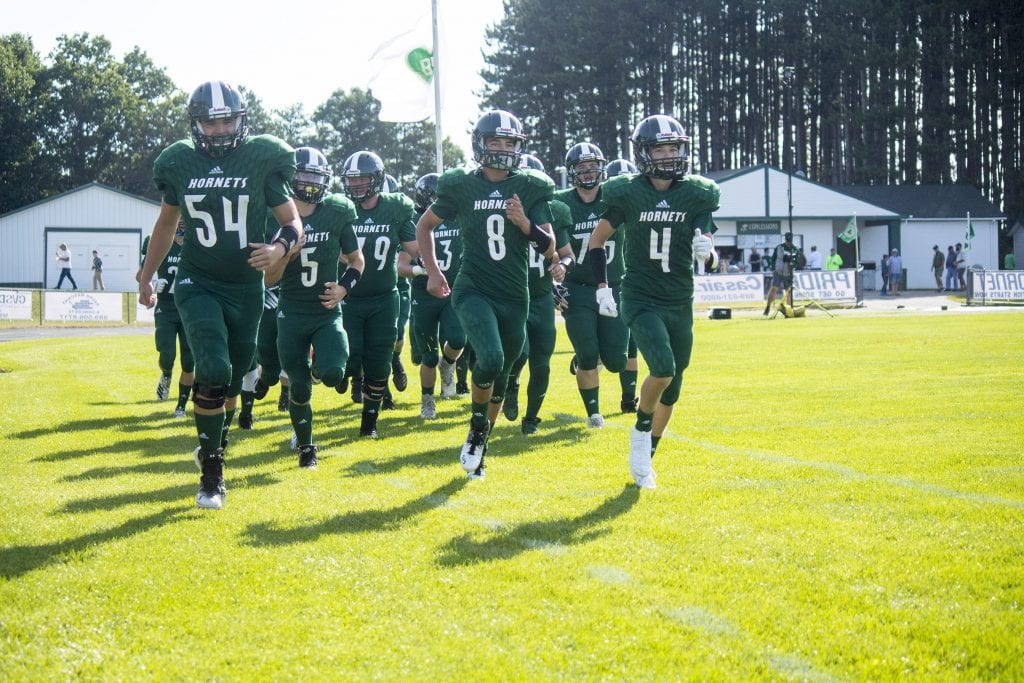 The Central Montcalm Green Hornets football team takes the field for their first game of the season against Morley Stanwood. Through three weeks, the Hornets are undefeated after going 0-9 last season for the first time in program history. — DN Photo | Alex Freeman

As we rapidly approach week four of the high school football season, which starts tonight, two of our nine area teams are still undefeated and, well, let’s just say some of us didn’t quite see this coming.

Central Montcalm and Vestaburg sit at a perfect 3-0 record after the first three weeks while every other area team has at least one loss. It’s not quite what we expected following last year when both the Wolverines and the Hornets finished their seasons without a single win.

From 0-9 to 3-0 is a monumental leap that should not be undercut. For the Hornets, 2018 was the program’s only winless season in school history, and they’ve been determined not to have the disappointment carry over.

I remember going to a 7-on-7 scrimmage at Montabella this summer where Central Montcalm was as well. I remember watching on as I saw a team with a lot of talent, especially in the senior class. It’s a senior class which has seen success in basketball as well as baseball, but not football, until now. The coaches were talking up how good the players were looking, the attitudes of the players were upbeat and this didn’t feel like a winless team.

In the season-opener, the Hornets would be tested in a Friday morning contest after a Thursday rain delay. The Hornets played a complete game from start to finish and pulled off a 22-20 victory over Morley Stanwood, a playoff team from 2018. The Hornets followed it up by defeating Grant at home and then traveling to Newaygo, another regular playoff participant, and grabbing the win, 34-28. The Hornets now find themselves 2-0 in conference play, sitting atop the CSAA-Gold.

Avid readers of our weekly football picks may have noticed that I picked Newaygo over Central Montcalm last week. And sure enough, the football players themselves took notice when I saw them at a Central Montcalm volleyball game earlier this week.

Yes boys, I’ll “wear this L” and take my loss in stride. I’ve seen the results and that’s one heck of a football team in Stanton. I can’t wait to see how the rest of the season shakes out.

And, though he’d be the first to give credit to his players and coaching staff, kudos to new head Hornets coach Scott Cripe for turning the program in the right direction and getting the kids to believe in themselves and get off to a great start. The Hornets host Fremont (0-3) at 7 p.m. tonight. 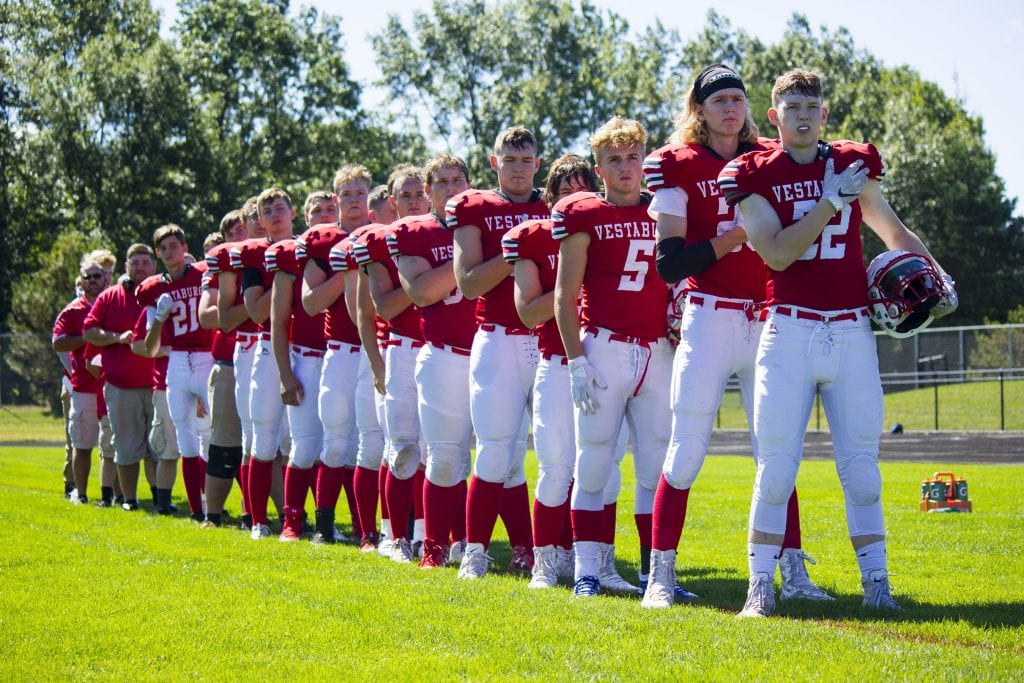 The Vestaburg Wolverines stand on the sideline during the playing of the National Anthem prior to the kickoff of their week three home game against Bangor. The Wolverines’ have started their 8-man football stint undefeated after going 0-9 last season and scoring just 28 points on offense all year. — DN Photo | Alex Freeman

Vestaburg’s 2018 season was marred by injuries and low numbers. In a season where they were forced to even forfeit a game due to injuries, 2018 is a year the Wolverines want to forget. The 2019 season ushered in a new era of Vestaburg football — its first season in 8-man football.

Of all the interviews I’ve done, I don’t think I’ll soon forget the confidence in the Vestaburg players who I interviewed following their scrimmage a week before the season started. Kaleb Crooks, Ethan Wood and Myles Jacques didn’t even hesitate when I asked them about expectations for this season.

“Hardware,” they all said to me.

Those were the expectations from day one — to bring hardware to the trophy case for football. Keep in mind, they said this knowing that they were not in a conference this year, meaning their quickest path to hardware of any kind was a district championship, which would also involve a playoff berth.

For a team which scored 28 points in nine games last season, I’ll be the first to admit I was skeptical. However, the team did hang tight with Mount Pleasant Sacred Heart in its scrimmage, a team which went 7-3 last year and made it to the 8-man playoffs. The Wolverines showed off their speed with the offensive weapons and their size on the offensive and defensive lines in the scrimmage. There were signs pointing to success, but even then, you’d think they’d need a game or two in the 8-man football format to get going, right?

Three wins later and the result is a resounding, “nope.” The Wolverines opened their season on the road at Webberville, a playoff team last season, and came away with an 18-8 win.

With their second win of the season, they had already eclipsed the one win they had in the previous two years. And on Saturday, with a 40-point performance in a win over Bangor, they eclipsed their point total from last year in a single game. The Wolverines will move to 4-0 following this week as their next opponent, Detroit Academy of the Americas, has forfeited their game. They will travel to Portland St. Patrick in week five.

High school football is often cyclical, and when it’s your time to shine, you have to take advantage of it. So far, the Hornets and Wolverines are making the most of their time on top. Best of luck to both teams in the coming weeks and beyond.