Home / BUSINESS / At 5%, GDP growth slumps to over 6-year low in Apr-June – Times of India

At 5%, GDP growth slumps to over 6-year low in Apr-June – Times of India

NEW DELHI: The country’s GDP growth slowed to an over six-year low of 5% in the April-June quarter, dragged down by manufacturing sector expansion of just 0.6%, sluggish financial services, farm and construction sectors and a slowdown in consumption.

Data released by the National Statistics Office (NSO) on Friday showed GDP growth in the April-June quarter, the first quarter of the fiscal year, slowed to 5%, lower than the 5.8% in the previous quarter and below the 8% in the first quarter of the previous year. The June quarter growth was the slowest since the March quarter of 2012-13, when the UPA was in office, making this the worst quarterly performance under the Modi government’s watch. The latest number is a 25-quarter low.

The data came on a day when finance minister Nirmala Sitharaman unveiled a mega bank merger plan, following up on the measures announced last week to give boost to the economy.

Asked, “The mood in the street is of despondency, it seems the government is in denial mode,” chief economic adviser Krishnamurthy Subramanian said, “The words being used are associated with periods of recession. We need to be careful what we’re talking about.There’s a slowdown but we still are at 5% in a global economy that’s not doing very well.” 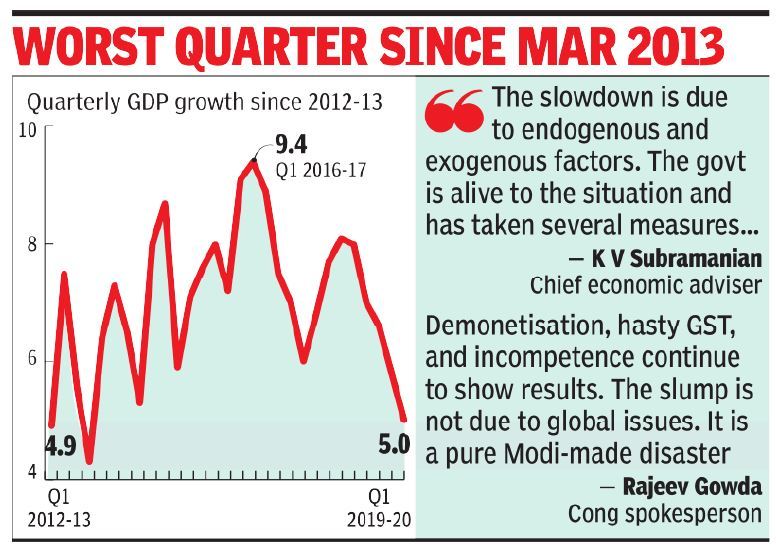 The government has also boosted its arsenal to stimulate growth with the transfer of Rs 1.76 lakh crore from the Reserve Bank of India (RBI). Sitharaman, however, said the government would take a call on how to spend the additional money that has poured in from the central bank.

In the past few months, several indicators have posted sluggish numbers. Several key sectors such as automobiles have faced the brunt of the slowdown leading to job losses and a cutback on production by companies.

The slowdown in the economy has been visible for the past few months with several indicators pointing to a contraction or posting sluggish numbers.

Several key sectors such as automobiles have faced the brunt of the slowdown leading to job losses and a cutback on production by companies. The RBI has cut interest rates for four consecutive times to counter the slowdown in the economy and there are hopes that growth may pick up in the coming quarters.

“The slowdown in growth is due to endogenous and exogenous factors,” said Subramanian while analysing the data. “The government is alive to the situation and has taken several measures including mega merger of banks,” the government’s chief economist said.

The sharp slowdown in the June quarter also triggered a political war of words between the opposition and the ruling party. “It is clear that the country is heading towards a major recessionary phase,” Congress spokesperson Gourav Vallabh said.

Sitharaman, however, hit back saying that inflation had skyrocketed during Congress-led UPA’s tenure. The latest data showed manufacturing sector growth slowed to a two-year low of 0.6%, sharply below the 12.1% growth in the first quarter of the last fiscal year, which indicates muted demand and slowdown faced by the corporate sector.

The farm sector grew by 2% in the June quarter, below the 5.1% recorded in the previous year’s first quarter and economists attributed it to floods in some parts of the country, the high base of last year and impact of uneven rainfall on the segment.

Some economists advocated more fiscal measures to boost growth and tame the slowdown as interest rate cut may not be enough to revive growth. “The contemporary issue for macro-economists is to focus on assuring adequate aggregate demand. We believe it is incorrect for central bankers to suggest that they have this challenge under control or with their current toolkit they will be able to get it under control. Fiscal policy needs to be a major focus, especially given what the low or negative interest rates mean for the sustainability of deficits,” said Soumya Kanti Ghosh, group chief economic adviser at State Bank of India.

Several economists pared their expectations for GDP growth for the current fiscal year which will end in March 2020, and estimated the economy to grow at 6.7%-6.8%, although they expect a growth pick up on the back of the government’s reform measures. “The government has announced a slew of measures to boost confidence among investors and consumers. The government has also indicated at frontloading of the capital expenditure to provide an additional boost to the economy,” said Madan Sabnavis, chief economist at CARE Ratings.

At 5%, GDP growth slumps to over 6-year low in Apr-June – Times of India

2019-08-31
admin
Share
Previous Newsnight’s Emily Maitlis anger at Amazon after she orders iPad but receives porridge and then stain remover i – The Sun
Next How to downgrade from the iOS 13.1 beta – 9to5Mac