All Rajasthan Congress MLAs in touch with me; govt is stable: Congress general secretary Avinash Pande – Times of India

P Chidambaram hearing in Supreme Court LATEST Updates: The Supreme Court has reserved its order on P Chidambaram’s plea seeking anticipatory bail in the INX Media case being investigated by the ED. The interim protection granted by the court to Chidambaram in the case has also been extended till 5 September.

On the ED’s handing over of documents to the Supreme Court bench in a sealed cover, Kapil Sibal said in the top court, “Sealed covers are not meant to seal the liberty of a man. If they (ED) don’t file the complaint for four years saying investigation is going on, will I not be able to get a bail for 4 years?”

Kapil Sibal, representing P Chidambaram raises questions about the counter affidavit filed by the ED which asserts that the material was put in front of former finance minister for confrontation and he was evasive.

“It is not my case that they (agencies) can’t arrest me (P Chidambaram). All we’re saying is if you have put the material to confront Chidambaram like you have claimed in your counter affidavit, show it to the Court,” argues Sibal.

SG Mehta said that if bribe is taken between 2007-2008 and the offence of bribery is added to in 2009, the bribe taken continues to be laundered.

Even if the person taking or giving the bribe is not directly involved in the process of bribery, the money taken was still laundered. In this case, the bribe was given in 2007-2008 but continued to be laundered. “Concealment of proceeds of crime is a standalone crime under PMLA (Prevention of Money Laundering Act)”, said ED in response to former FM’s claims that the agency was charging him in the retrospective effect of PMLA.

ED argues that agency officials know how to extract information without third degree and that anticipatory bail would reduce interrogation to a mere ritual.

SG Mehta further states, “There are checks and balances, which is is why all accused are produced before a magistrate or a special court. The accused can then tell the court of any ill-treatment in he experienced in custody.”

“Gravity of an offence is an important factor to be considered while entertaining petitions filed for anticipatory bail,” SG Mehta said while citing judgements to assert the fact that economic offences are very grave as held by courts in the past.

“They (senior adovocates representing ex-FM Kapil Sibal and Abhishek Manu Singhvi) have argued that gravity of an offence is subjective. PMLA (Prevention of Money Laundering Act) offences may not be grave for them but the courts have consistently held that economic offences are grave in nature,” said Mehta.

“Apex court cannot become a regular court of appeal,” SG Mehta argued citing case-laws to substantiate his contention to show that apex court’s interference at this stage is unwarranted. “This Court ordinarily does not interfere in matters of bail and High Courts should be the final authority.” Mehta stated.

Indrani Mukerjea, who had told investigators about P Chidambaram’s and his son, Karti’s involvement in the money laundering and corruption case related to the INX media firm, reacted to former-FM’s arrest by calling it ‘good news’

Solicitor General Tushar Mehta to continue his arguments on behalf of the ED against anticipatory bail for P Chidambaram today at 11.30 am in the INX Media Case.

The Supreme Court extended the interim protection from arrest granted to former finance minister P Chidambaram in the INX Media money laundering case lodged by the Enforcement Directorate to Thursday.

During the hearing held before the Bench comprising Justices R Banumathi and A S Bopanna, Solicitor General Tushar Mehta, representing the Enforcement Directorate (ED), said that the case is not a witch hunt but a serious case of money laundering, supported by evidence.

“This is not a witch hunt as alleged by them. We have material to show that it is a serious case of money laundering. We have collected cogent materials in the case,” Mehta told the bench. 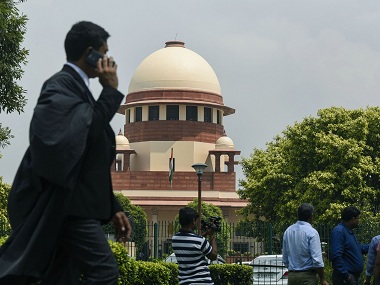 The counsel, who will continue to present his arguments before the Bench on 28 August said that Chidambaram was playing the “victim” card to evade arrest by the ED. “A ghost is sought to be created by playing the victim card,” Mehta said while opposing the grant of anticipatory bail to Chidambaram.

Mehta argued that the ED has “cogent evidence” to prove that the case is that of money laundering. “In the money laundering case, we would be dealing with very intelligent people, stupid men cannot do laundering. These offences are not committed in the heat of the moment, they are cleverly crafted. Most of the laundering is a digital operation,” Mehta said.

Emphasising that the probe agency has a statutory right to arrest, Mehta said that the need for custodial interrogation has to be decided by the Special Court. “An arrest is done by people of higher rank, a director, on the basis of materials we have in possession, recorded reasons,” he said. The Solicitor General said the ED has the material in its possession against Chidambaram, which gives them the power to arrest.

The ED counsel argued that it has records from overseas banks and that revealing the evidence may impact the investigation and influence the witnesses. “The ED received the material, like records from banks all over the world. In this case, the statute provides that probe report should be sent to neutral adjudicatory authority, in a sealed cover, to avoid investigating agency tampering with them. These are statutory checks and balances provided in Prevention of Money Laundering Act, 2002.”

“The money laundering case is very sensitive. We cannot share details of the investigation till the chargesheet is filed. I request the court to examine the report given in sealed cover,” Mehta said in the court.

To this, Congress leader and senior advocate Kapil Sibal, who is the counsel for Chidambaram, along with Abhishek Manu Singhvi said that he never made the case that accused should be given access to evidence but he should be confronted with it.

Sibal had said in the hearing on Tuesday that the former finance minister was quizzed by the agency on three dates in 2018 and 2019 and transcripts of questioning would clear the air on whether he was evasive in his replies, as alleged by it while seeking his custodial interrogation. The Supreme Court is hearing Chidambaram’s plea, which challenged the Delhi High Court’s 20 August verdict, in which the former finance minister was denied bail in the corruption and money laundering case lodged by the CBI and ED.

CBI had lodged an FIR on 15 May, 2017, alleging irregularities in Foreign Investment Promotion Board clearance granted to INX Media group for receiving overseas funds of Rs 305 crore in 2007 during Chidambaram’s tenure as finance minister, when the company had clearance only to receive four crore. His son Karti Chidambaram’s company allegedly received Rs 10 lakh from INX Media for helping it escape punitive action for the same.

The ED later also lodged a case against Chidambaram, who was a union minister between 2004 and 2014, when the UPA-I and UPA-II governments were at the Centre.

Told You So: Jyotiraditya Scindia Tweet On Sachin Pilot – NDTV

Told You So: Jyotiraditya Scindia Tweet On Sachin Pilot – NDTV