Counting 50% of paper trail will delay results by 5 days: EC – Times of India

No international flights until July 31: why has DGCA extended the ban on flying abroad? – The Indian Express

NEW DELHI: The Election Commission told the Supreme Court on Friday that counting VVPAT slips of 50 per cent EVMs, as demanded by 21 non-NDA political parties, could delay declaration of results of the general elections by five days with no gain to the existing 99.99 per cent voter confidence in the voting machines.

“It is submitted that 50 per cent VVPAT slip verification in each assembly segment of a parliamentary constituency or assembly constituency on an average shall enlarge the time required for counting to about five days,” the EC said. 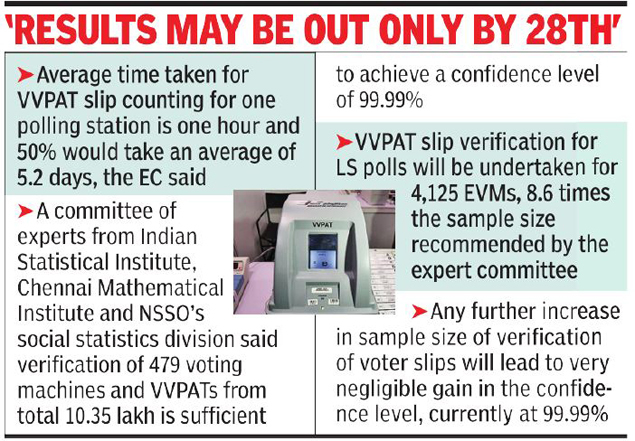 The commission also said that several assembly constituencies had more than 400 polling stations which would require about 8-9 days to complete the VVPAT slip count. “As demands for recount of VVPAT slips is being done routinely, it will further compound the time requirement,” the EC said.

The poll watchdog said there was no bar-code on VVPAT slips to tally them mechanically through counting machines. “At present, there is no mechanical system for counting VVPAT slips,” it said. This means results of Lok Sabha polls, scheduled to commence on May 23, will be declared only on May 28 in most cases. In assembly constituencies with over 400 polling stations, results would be out only on May 30 or 31.

The commission’s affidavit, settled by senior advocate CA Sundaram, said, “As VVPAT slip counting requires extensive training and capacity building of election officials, a substantial increase of such officials will be required for deployment in the field. Setting up additional VVPAT counting booths shall require larger counting halls, which already pose a great difficulty in certain states.”

The EC said such an elaborate exercise for counting VVPAT slips of 50 per cent of 10.35 lakh EVMs would not improve reliability of the machines. It said it had engaged an independent committee of experts from Indian Statistical Institute, Chennai Mathematical Institute and NSSO’s social statistics division to examine demands from political parties for increasing sample size for VVPAT slip verification ranging from 10 per cent to 100 per cent.

The expert committee submitted a report on March 22 and recommended that “undertaking slip verification for 479 EVMs and VVPATs of entire 10.35 lakh EVMS and VVPATs to be used in the ensuing elections is sufficient to achieve a confidence level of 99.99 per cent”.

The EC said as per existing guidelines, VVPAT slip verification in Lok Sabha elections will be undertaken for 4,125 EVMs, which is 8.6 times the sample size recommended by the expert committee. Thus, the random verification of one EVM and VVPAT per assembly segment was statistically and technically robust, it said.

“Any further increase in sample size of verification will lead to very negligible gain in the confidence level, which currently is 99.99 per cent. It is pertinent to mention that till date, no mismatch has been detected in mock polls or in verification of VVPAT slips carried out at 1,500 polling stations,” the EC said and sought dismissal of the petition filed by opposition leaders led by Andhra Pradesh CM N Chandrababu Naidu.

The EC said EVMs had completely eliminated the problem of invalid votes, which in many cases earlier were more than the winning margin in a constituency. The voting machines have substantially reduced booth capturing incidents and reduced incidence of manual error in counting, leading to disputes and demands for recount. EVMs had also substantially reduced the time taken for counting, it said.

Counting 50% of paper trail will delay results by 5 days: EC – Times of India

2019-03-30
admin
Share
Previous Store owner to Saravana Bhavan boss: Rise and fall later, heads to jail for life – The Indian Express
Next Debris from anti-satellite test to disintegrate in 45 days: official – The Hindu