Dalit Leader, 90 Others Arrested After Clashes In South Delhi Over Temple – NDTV News

Dalit leader Chandrashekhar Azad and 90 others were arrested last evening after a massive protest in Delhi against the demolition of a temple in the city dedicated to the 16th century mystic poet-saint Ravidas. Violent protesters damaged several vehicles and two motorcycles were set on fire, according to the police. Several people, including 15 police personnel have been injured.

The demolition of the Ravidas temple in a forest area in south Delhi’s Tughlakabad on August 10, based on the Supreme Court’s orders, has turned political with many parties demanding that the temple be reconstructed either at the same spot or at an alternative location. The demolition is also an emotive issue for the followers of the Ravidassia religion, mostly comprising people from the so-called lower castes.

“This insult to the voice of Dalits is intolerable. This is an emotive issue. Their voices must be respected,” Congress leader Priyanka Gandhi Vadra tweeted in Hindi this morning, hitting out at the centre.

“First the BJP government messes around with Ravi Das temple – the symbol of cultural heritage of crores of Dalit sisters and brothers, and when thousands of Dalit brothers and sisters raise their voice in the national capital, the BJP baton-charges them, gets tear gas fired at them and arrests them,” the Congress general secretary said in her previous tweet. 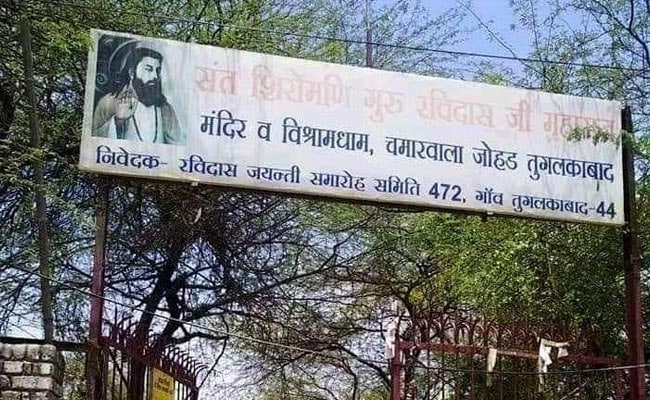 The Ravidas temple in Delhi’s Tughlakabad was demolished on August 10 following the Supreme Court’s orders.

Chandrashekhar Azad, who heads the Bhim Army, and the others arrested will be produced before a Delhi court today.

“At around 7:30 pm, the mob that gathered at Ravidas Marg turned unruly and became violent despite persuasion and appeal by police to maintain peace and started pelting stones and attacking policemen,” senior police officer Chinmoy Biswal said.

The police denied reports of injury to the protesters.

Thousands of Dalits, who trooped into Delhi from states such as Punjab, Rajasthan, Haryana and Uttar Pradesh, marched from Ambedkar Bhawan in central Delhi to Ramlila Maidan on Tuesday. Whle the protesters had permission to hold a rally only in Ramlila Maidan, Chandrashekhar Azad and thousands of his supporters tried to reach to the demolition site in Tughlakabad, some 21 km away.

The protest caused massive traffic jams in several areas of the capital.

The protesters are demanding rebuilding of the temple by the centre or handing over of the plot to the community and rebuild the temple.

Ravidas was one of the key faces of the bhakti movement between the 15th and the 16th centuries. Hymns written by him are included in the Guru Granth Sahib, the holy book of the Sikhs. He is considered as the founder of 21st-century Ravidassia religion.

The protest in Delhi came a week after a similar protest of Dalits in Punjab on August 13.

Delhi’s ruling Aam Aadmi Party (AAP) has demanded Prime Minister Narendra Modi’s intervention in ensuring that the land be given back to the Ravidas community to rebuild the place of worship.

BJP leader and former union minister Vijay Goel criticised the AAP for allegedly politicising the issue. “I have proposed that the temple be built at an alternative place after the approval of the Supreme Court. If they agree, we will take the matter up with the DDA,” he said.

(With inputs from PTI)

Dalit Leader, 90 Others Arrested After Clashes In South Delhi Over Temple – NDTV News