Home / BUSINESS / From plastic surgery to citizenship of Vanuatu: Fugitive Nirav Modi planned it all – Times of India

From plastic surgery to citizenship of Vanuatu: Fugitive Nirav Modi planned it all – Times of India

NEW DELHI: For someone who has remained doggedly elusive and managed to dodge an international manhunt for 15 months, Nirav Modi will remain confined to the United Kingdom until India’s extradition plea is diposed of.

The controversial diamond trader fled the country along with his uncle Mehul Choksi in January 2018 after cheating Punjab National Bank of Rs 13,578 crore.

During the last 15 months, Modi tried everything to evade prosecution including applying for a citizenship of Vanuatu, a small Pacific island nation 1,750 kms east of Australia; sought permanent residence in Singapore; consulted big law firms in the UK for obtaining a secure shelter in a third country and reports suggest that he was even planning a plastic surgery to change his appearance. However, after his arrest in London, he has literally run out of moves. 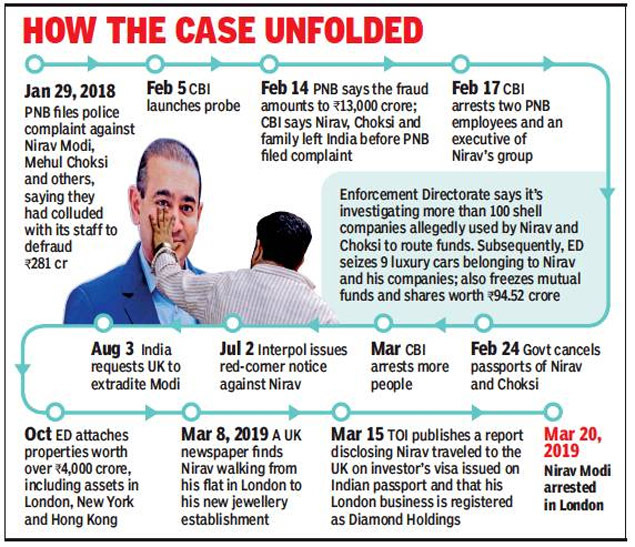 Since Nirav Modi fled the country last year, Indian agencies were tracking his every movement including his frequent travels to Europe, UAE, his financial transactions and meetings, officials told TOI.

Some officials claimed that he wasn’t as smart as his uncle — Mehul Choksi, who applied for the citizenship of Antigua and Barbuda in 2017 itself. When CBI and ED approached Interpol for a red notice against both, Choksi filed representations with the international police body citing “politically motivated probe” while Modi reportedly thought that he didn’t need to since he cannot be caught out of India, sources said.

Officials said Modi is in deep trouble since the evidence against him can stand any international judicial scrutiny. In Choksi’s case too, Indian agencies are hopeful that Antigua will act on the extradition request although there hasn’t been any response from the Caribbean nation for months now.

The ED’s request for declaring Modi a fugitive economic offender under the new law is currently pending before the court but the agency is hopeful that it will be accepted. Around the time when the PNB scam rocked the nation, Modi was travelling to various countries even after his Indian passport was revoked.

Officials asserted Modi has no place to hide now, and most of his accomplices who helped him including Mihir Bhansali, Subhash Parab and Mayank Mehta are also being pursued.

From plastic surgery to citizenship of Vanuatu: Fugitive Nirav Modi planned it all – Times of India

2019-03-21
admin
Share
Previous Another Terror Attack On India Will Be "Extremely Problematic": US To Pak – NDTV News
Next Cyclone Idai: ‘15,000 people still need to be rescued’

LAC disengagement: India to look out for signs of China not abiding by deal – Times of India

LAC disengagement: India to look out for signs of China not abiding by deal – …