Karnataka Assembly Trust Vote (Floor Test) Latest Updates: HD Kumaraswamy missed the 6 pm deadline set by the governor for him to prove his majority on the floor of the House. The Assembly is currently debating on the motion of confidence.

HD Kumaraswamy has moved the Supreme Court to seek clarification on the order that rebel MLAs can’t be compelled to attend Assembly proceedings. In his plea, Kumaraswamy said that he cannot act on governor’s direction to complete trust vote process before 1:30 pm on Friday. “No such direction on trust vote could have been issued by Governor Vajubhai Valla when confidence motion was already initiated. Governor cannot dictate the House on the manner in which debate of confidence motion has to take place,” he said in the plea.

HD Kumaraswamy said in the Assembly on Friday that he had received a “second love letter” from the governor on the deadline for the floor test. He also asked why the governor was reacting to the situation now and not ten days ago. 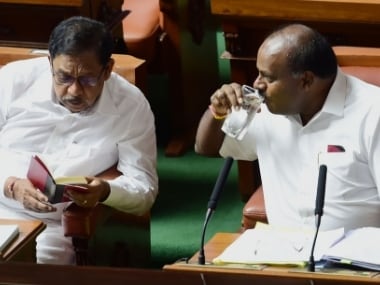 2019-07-19
admin
Share
Previous Priyanka not allowed to meet kin of 10 U.P. firing victims – The Hindu
Next Philip Hammond will ‘not exclude’ backing no confidence vote to stop no-deal Brexit