Karnataka Assembly trust vote Latest Updates: The floor test will not be held on Thursday as Speaker KR Ramesh Kumar has adjourned the House till 11 am on Friday. Governor Vajubhai Vala earlier the asked Speaker to conduct the trust vote on Thursday itself. In the Assembly, Karnataka BJP chief BS Yeddyurappa also said, “Even if it is midnight, let the trust vote be held today.”

A BJP delegation submitted a memorandum to Governor Vajubhai Vala on the motion of confidence. Speaking to reporters, BJP leader Jagadish Shettar said, “The chief minister had fixed today (Thursday) for the vote of confidence, but when the motion was moved and the debate started, Siddaramaiah, Krishna Byre Gowda, and HK Patil moved point of orders. We have requested the governor to direct the Speaker to continue the debate on vote of confidence,” he said.

Amid chaos in the Assembly over MLA Shrimant Patil being flown to Mumbai for treatment, Speaker directed Home Minister MB Patil to get in touch with the MLA’s family and submit a report by Friday. “It does not look natural. If the home minister can’t ensure protection, I will talk to DGP,” he said. “Our procedure is — you have to go to a government hospital when there is an emergency; medical board has to certify (the treatment). How do I know if this hospital in Mumbai exists?”

Chaos broke out in Karnataka after Congress leader DK Shivakumar alleged that Congress MLA Shrimat Patil, who went missing from Bengaluru resort on Wednesday, was kidnapped by the BJP leaders. The Congress leaders flashed Patil’s picture, who turned up in a Mumbai hospital today, undergoing treatment for chest pain.

“Supreme Court order has discussed about my rights as Congress Legislative Party leader to issue whip but I was not a respondent to present my concerns. As the outcome of anti-defection law has its implications on no-confidence motion, I would like to request to postpone the motion till we get clarification from the Supreme Court,” Siddaramaiah said.

As of today, 15 rebel MLAs, 2 independents, 2 Congress MLAs, and 1 BSP MLA are not in the Assembly. That brings the quorum down to 204 including Speaker, which means that a party needs 103 MLAs to win in today’s vote. If the voting is conducted today, BS Yeddyurappa lead BJP has every chance of coming out victorious as it has the support of 105 MLAS

Karnataka Speaker Ramesh Kumar has allowed for a whip to be applied on all MLAs in the Karnataka legislative Assembly. “This house holds the Supreme Court in the highest esteem. Simultaneously, let me make it abundantly clear to the CLP leader that this office is not restraining you (him) from doing or exercising any of (his) authorities. I have no role to play in that,” the Speaker said.

Why are you in the hurry to conduct a trust vote, HD Kumaraswamy asked in the Karnataka Assembly. He said that given the circumstances, the country has a write to listen to each and every MLA who wants to clarify his position on the trust vote.

In an important development, that partially seems to favour the BJP as of now, the lone Bahujan Samaj Party MLA has said he will abstain from participating in the floor test. The Times of India quoted N Mahesh as saying that he will not be participating in the Assembly proceedings.

Chief Minister HD Kumaraswamy and Speaker KR Ramesh have reached Vidhana Soudha in Bengaluru moments before the Motion of Trust will be laid on the table. The proceedings are expected to start at 11 am.

BJP’s state unit chief BS Yeddyurappa, after arriving at Vidhana Soudha said, “We are 101 percent confident. They are less than 100, we are 105. There is no doubt that their motion will be defeated.”

The BJP is banking on Karnataka coalition government losing the trust vote, after to stake claim to form the government, replacing the Speaker after giving 14 days notice and then annulling the disqualification process initiated against the truant MLAs named by the Congress and JD(S).

Reports say that the Bengaluru police has decided to impose restrictions under Section 144 around 2 kilometre radius of the Vidhan Soudha. The state Assembly is expected to witness a high-drama trust vote at 11 am today

Karnataka Assembly Speaker KR Ramesh said that the verdict of the Supreme Court should not be seen as a ticket to do whatever. He said the judgment has in fact increased his responsibility.

The Congress-JDS government in Karnataka is hanging by a thread ahead of the floor test on 18 July, with the rebel MLAs refusing to yield after the Supreme Court held they cannot be compelled to attend the Assembly session to decide the ruling coalition’s fate.

As the coalition with truncated strength struggled to shore up its numbers amid fading hopes, the Supreme Court on Wednesday ruled that the 15 rebel Congress-JD(S) MLAs “ought not” to be compelled to participate in the proceedings of the ongoing session of the state Assembly.

The court verdict was interpreted in political circles as a relief for the rebel lawmakers, as it categorically said an option should be given to them as to whether they wanted to take part or stay out of the Assembly proceedings.

The ruling coalition had held out the threat of using the Whip against the wayward MLAs, citing the disqualification provision under the anti-defection law.

Armed with the court order, the rebel Congress-JD(S) MLAs camping in Mumbai said there was no question of stepping back on their resignations or attending the session.

“We are happy with the decision of the Honourable Supreme Court, we honour it,” rebel Congress MLA BC Patil said in a video released to the media, further receding the hopes of the ruling coalition to win them back to their fold.

As the spotlight turned on the Supreme Court, a bench headed by Chief Justice Ranjan Gogoi said the Speaker was free to decide on the resignations of the rebel MLAs within the time-frame decided by him. 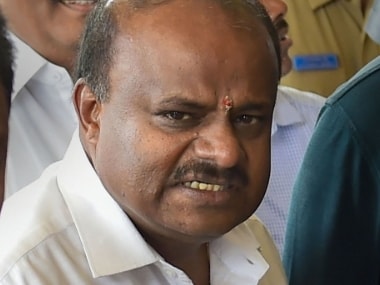 The apex court was hearing the plea of 15 rebel MLAs of Congress and JD(S), seeking a direction to the Speaker to accept their resignations from the Assembly.

Karnataka Assembly Speaker KR Ramesh Kumar welcomed the Supreme Court decision, giving him freedom to decide on the resignations of rebel MLAs, and said he would conduct himself responsibly in accordance with the principles of the Constitution.

“With utmost humility I welcome and respect the Supreme Court decision,” he said soon after the apex court pronounced its order on the crisis that has pushed the state into a welter of political confusion and chaos.

“The Supreme Court has put extra burden on me, I will conduct myself responsibly in accordance with constitutional principle,” he told reporters in Kolar, his home town.

The Speaker has, however, not given any indications about the time frame within which he would decide on the resignations.

Meanwhile Congress has pressed for disqualification of 13 MLAs, including independent R Shankar, who had merged his Karnataka Pragnyavantha Janatha Party with it.

Disqualification petition had been moved against Ramesh Jarkiholi and Mahesh Kumatalli earlier itself.

With the support of the two independents, the opposition BJP has 107 MLAs in the 225-member House, including the nominated MLA and Speaker.

If the resignations of the 16 MLAs are accepted, the ruling coalition’s tally will plummet to 101, reducing the 13 month-old Kumaraswamy government to a minority.

Congress’ pointsman and minister DK Shivakumar maintained that the party can issue a whip to ensure the presence of all the party MLAs in the House and take necessary action against them for any violation.

He accused some BJP leaders of trying to misguide that the whip is not valid.

Happy with the verdict, Karnataka BJP president BS Yeddyurappa said it was a “moral victory” for the rebel MLAs.

“I welcome the Supreme Court decision. It is a victory of the Constitution and democracy. It is a moral victory for rebel MLAs,” he said.

But the Congress in Karnataka slammed the Supreme Court order as a “bad judgment”, which seemed to protect the defectors and encourage horse-trading.

“The #SupremeCourt verdict is now encroaching upon the rights of the Legislature. This is a bad judgement which seems to protect the defectors and encourages horse trading and also violating the doctrine of separation of powers,” KPCC chief Dinesh Gundu Rao said in a series of tweets.

A joint delegation of the coalition, including Kumaraswamy and Congress Legislature Party leader Siddaramaiah, met the Speaker and told him the Supreme Court had restricted their right to issue a whip, but “we have the right to impose a whip.”

Speaking to reporters after the meeting with the Speaker, senior minister Krishna Byregowda said the apex court had stated that attending or not attending the session was left to the MLAs, but the assembly rules state that the legislators had to seek permission for their absence.

“We have asked the Speaker if this relaxation has been granted,” he said.

The 59-year old son of former Prime Minister HD Deve Gowda managed to be back at the helm with the support of the Congress after the May 2018 Assembly polls threw up a fractured mandate, with BJP emerging as the single largest party, but falling short of numbers to be in power.

The current political turbulence was triggered a fortnight ago, with a raft of resignations by rebel lawmakers, unhappy with the coalition for a variety of reasons, from not getting ministerial berths to “dominance” of the Deve Gowda family.

A humiliating defeat for the ruling coalition in the Lok Sabha polls that saw them win only two of the 28 seats in Karnataka, with BJP walking away with 25 and an independent backed by it with one, only exacerbated simmering tensions.