Kashmir news LATEST updates: Since the Indian government decided to abrogate Article 370 in Jammu and Kashmir, reactions have been pouring in from all corners of the world, especially Pakistan. Pakistani ministers and journalists have taken to Twitter and vociferously slammed the Indian government for taking a “unilateral” decision on an “international matter”. Syed Ali Haider Zaidi, a Pakistani politician who is the current Federal Minister for Maritime Affairs, in office since 11 September 2018, tweeted a video on Sunday with the caption: “Let the world see what @narendramodi Govt is doing in #Kashmir The #Hitler from the East rises while the world sleeps. @realDonaldTrump should consider imposing trade sanctions on India to control this monster before it’s too late! #SaveKashmirFromModi #IndianHitlerModi”. Responding to the video, an Indian journalist called it out as fake news and said, “Old video from Haryana.”

The Dravida Munnetra Kazhagam (DMK) on Monday tweeted saying in defence of democracy in Kashmir and demanding the release of political party leaders in the state, the DMK and all its MPs, led by its president MK Stalin, will protest outside Delhi’s Jantar Mantar on 22 August.

Even as 196 of 900 primary schools reopened after 15 days of curfew in Kashmir, parents said that there was “no question” of sending their children to school. “There is so much uncertainty in the situation that sending kids to school at this stage is out of question,” Farooq Ahmad Dar, a parent, was quoted by PTI as saying.

Reports said that the parents remained defiant even as the Jammu and Kashmir Police appealed to parents in the Kashmir Valley to send their children to school.

In a series of tweets, Rashid had on Sunday said that the people of Jammu and Kashmir have been rendered powerless due to the restrictions on communication and movement in the restive state. “People are saying that Jammu and Kashmir Police has no authority on law and order situation….Everything is in the hands of paramilitary forces,” she tweeted.

In accordance with the Jammu and Kashmir government’s direction that primary schools were to reopen in the state on Monday, students attended school in Jammu region’s Rajouri district. However, schools in the Valley “remained shut” because parents were reluctant to send their children, CNN-News18 reported.

The report also said that despite the government’s efforts to bring normalcy back to the Valley after almost 15 days of restrictions on communications and movement, the situation remained “far from normal”.

West Bengal chief minister Mamata Banerjee, asserting that human rights is a subject “close to her heart”, on the occasion of ‘World Humanitarian Day’, tweeted that human rights had been “totally violated” in Kashmir, as several parts of the restive region faced curfew and other restrictions for the 15th day on Monday. The restrictions were put in place by the Narendra Modi-led government due to its decision to abrogate Article 370, which gave the state a degree of autonomy.

Mamata added, “Human rights is a subject very close to my heart. In 1995, I was on the road for 21 days to protect human rights violations against deaths in lock-ups.”

Restrictions were further eased in 50 police station areas of the Kashmir Valley on Sunday though curbs were tightened in some parts of Srinagar after stray incidents of violence, and internet services were snapped again in five districts of the Jammu region, a day after they were restored, as strict security arrangements continued in Jammu and Kashmir.

The first batch of 300 Haj pilgrims returned to Kashmir from Saudi Arabia on Sunday amid elaborate arrangements made by the authorities to ensure their smooth return, officials said.

“The process of easing prohibitory orders is on. The restrictions were eased in 50 police station areas today as against 35 police station areas yesterday,” government spokesman Rohit Kansal told reporters on Sunday evening. Kansal said a new week is starting from Monday and “we are looking at it with new hope”.

“Over 190 primary schools will reopen tomorrow in Srinagar alone and after this, we look forward to other areas like taking up development-related activities,” he said. 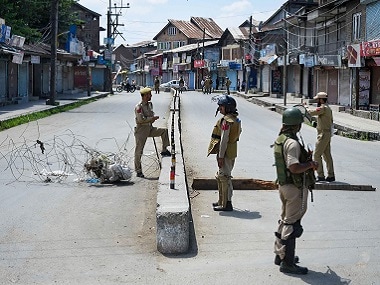 Security personnel stand guard at a check point in Srinagar during restrictions. PTI

Kansal said the duration of relaxation was also increased from six hours to eight hours on Sunday.

“The relaxations were announced thereby enabling people and shopkeepers to plan in advance. The relaxation hours were increased keeping in view the response yesterday and the request by traders. This process will continue in the days to come,” he said.

The government spokesman said there were reports of “hooliganism by some mischievous elements coercing the shopkeepers” in some areas to shut their shops.

“The law enforcing agencies have taken note. There are no reports of any untoward incidents in the areas which witnessed relaxations. However, there are reports of two-three incidents of disturbances in which two persons have been injured who are stated to be stable. These incidents have been dealt by local security forces,” he said.

On the issue of the restoration of mobile phone services in the valley, Kansal said easing of restrictions on communication will continue and the endeavour is to restore landline telephone services to the fullest as quickly as possible.

Earlier, the officials said restrictions were tightened in some parts of Srinagar city on Sunday following incidents of violence a day earlier. They added that restrictions continued in many parts of the valley for the 14th day on Sunday.

The restrictions were reimposed in certain areas which witnessed trouble on Saturday after the curbs were eased in several areas of the city and elsewhere in the valley, the officials said. They said protests took place at around a dozen places in which several protesters were injured.

However, the exact number of injuries was not available, the officials said. On Saturday evening, Kansal said protests took place at six places in the valley in which eight persons suffered injuries.

Landline telephone services have been restored in several areas of the city as the process to bring more areas on the telecom map was going on, the officials said. Some private vehicles were seen plying in the civil lines areas of the city and the other district headquarters of the valley on Sunday, they said, adding some shops were also open in those areas.

In the Jammu region, low-speed (2G) mobile Internet services were once again snapped in five districts on Sunday to check rumour-mongering, a day after the services were restored. A police official said the authorities concerned directed service providers to snap the services around forenoon. He said the decision was taken to check rumour-mongering and maintain peace and tranquillity.

Low-speed mobile Internet services were restored in five districts of Jammu, Samba, Kathua, Udhampur and Reasi during the intervening night of Friday and Saturday after remaining suspended for nearly a fortnight.

Mobile Internet services were snapped across Jammu region on August 4, a day before the Centre revoked the provisions of Article 370 that gave special status to Jammu and Kashmir and bifurcated it into two union territories — Jammu and Kashmir, and Ladakh.

Immediately after the resumption of 2G mobile Internet services in five districts, Jammu Inspector General of Police Mukesh Singh had warned of strict action against anyone circulating fake messages or videos on social media. The first batch of 304 Haj pilgrims from Saudi Arabia landed at the Srinagar airport Sunday morning, the officials said.

They said elaborate arrangements were made for the smooth movement of pilgrims to their respective destinations.

“Only one family member is allowed at the airport to receive the Hajis. A fleet of State Road Transport Corporation (SRTC) buses has been deployed to facilitate the movement of Hajis and their relatives with the coordination of all district administrations,” an official said.

The security forces were directed to allow passage of pilgrims and their relatives, who were issued passes, through the areas where restrictions are in place, the officials said.