LONDON: A UK judge on Friday refused fugitive diamantaire Nirav Modi‘s second application for bail in a London court after hearing Indian government’s argument that he had threatened to kill a witness, destroyed evidence and even tried to buy citizenship in the remote south Pacific island chain of Vanuatu, near Fiji – though his application was declined.

Chief magistrate Emma Arbuthnot said: “There are allegations of substantial fraud on the bank in India of up to US$2 billion. The government of India has, very unusually for a case of fraud, alleged that interference of witnesses has taken place and that evidence has been destroyed. I am conscious of his right to bail but I find the conditions of bail do not allay my fears, so no bail.” 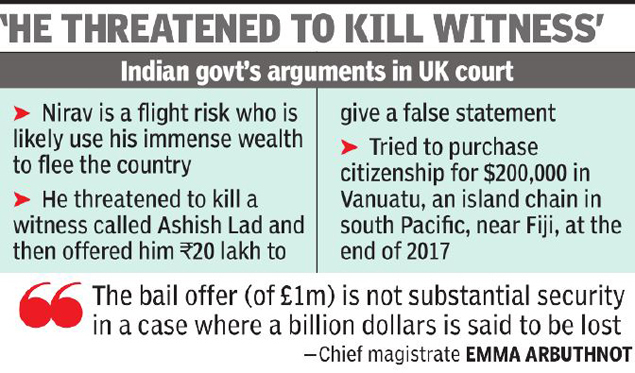 Nirav will next appear at Westminster magistrates’ court on April 26 by video-link from prison.

TOI had reported last week that CBI and ED officials expect the process of Nirav’s extradition to be “much faster” than the exercise to bring back Vijay Mallya and feel it should not take more than six months.

At the bail hearing of fugitive Nirav Modi, his lawyer Clare Montgomery QC had put forward a bail security offer of up to £1 million and offered for Nirav to be electronically tagged or report at his local police station in something akin to “house arrest”.

But Arbuthnot said: “Clare’s offer is not substantial security in a case where a billion dollars is said to be lost. These are early stages of the case and there are major inconsistencies in some witness statements. Looking at the case as it is today, I do find substantial grounds to believe he would fail to surrender based on his lack of community ties, as his son has gone to the US, and the large resources he could draw on.” “He was attempting to become a citizen of Vanuatu and that is some way away for someone trying to run businesses, which may indicate he has interest to move away from India at this important time,” the judge added.

Nirav, who appeared in the dock, looked as if he was about to cry when he heard this. He was unshaven, with greasy hair and looked unkempt and dishevelled compared to his first appearance in court last week when he looked more sophisticated like a celebrity jeweller. He appeared to have lost weight and looked upset and a shadow of his former self. Nirav did not display the same strength in the courtroom, which was packed with press, as Vijay Mallya had done during his trial.

The court heard that Nirav had tried to purchase US$200,000 buy citizenship in Vanuatu, a tiny island in the South Pacific ocean, at the end of 2017 but it was refused. “The Vanuatu authorities discovered there was an ongoing investigation so it was declined,” Toby Cadman, prosecuting, on behalf of the Indian government, told the court.

Cadman argued Nirav should not be given bail as he presented a flight risk and had interfered with witnesses and with evidence, as well as committed a high value of fraud against Punjab National Bank. He said Nirav had the resources and intent to settle in a jurisdiction that may not be willing to extradite him to India. “It is quite clear he is a man of significant wealth” he said, referring to “two cash transfers of US$12 million and £878,000”, and the fact he has “diamonds, gold and pearls of substantial value at his disposal”.

Montgomery argued that Nirav had known about the likelihood of his extradition being sought for some time. “He has been in the UK since January 2018 and was told he would be arrested in March this year and yet went to a bank to open an account and apply for a driving licence. So, the idea this was leading up to a plan to flee is nonsense. He can’t travel as his passport is cancelled and he can’t apply for residence anywhere else as he is a wanted man,” she said.

She said Nirav did have a son at the £40,000-a-year top public school, Charterhouse, but added that he had now left to go to university in the US. “He got a dog instead as may be familiar to ageing parents. The dog is being cared for by someone else.” This led Nirav, who was otherwise an emotional wreck, to smile. “He is setting himself up to stay here not flee,” she said, adding he did not have access to vast resources as his bank accounts in Switzerland and India had both been frozen.

But Cadman said Nirav had been arrested on a warrant issued in London on March 13 this year, accused of conspiracy to commit fraud and conspiracy to conceal criminal property. He said the documents set out a case of fraud of between US$1 and £2 billion depending on exchange rates relating to the issuance of a large number of LoUs.

“Nirav allegedly conspired to defraud the bank of these large amounts and then laundered the proceeds of the crime,” Cadman said.

The crimes occurred between January 1, 2017 and December 31, 2017. “Nirav was the principle beneficiary of the fraud and the person who devised the whole scheme. There are a number of transfers that have been made to a number of bank accounts. In the fullness of time, we will set out where the money was sent. There were 144 such letters in relation to three companies Nirav is said to control,” Cadman said.

He then went on to say that Nirav had threatened to kill a witness called “Ashish Lad” in a phone call and then offered two million rupees or £22k to him provide a false statement. “This is a case in which bail should not be granted under any circumstances. There is a possibility he will interfere with witnesses,” Cadman said.

Cadman said Nirav does not have sufficient ties in the UK that would compel him to cooperate and due to the resources available to him, there would be an “overwhelming desire to flee the jurisdiction”.

“There is an allegation that mobile phones and servers holding material critical to the fraud were destroyed at the request of Nirav so there is a risk of further destroying of evidence and interfering with the administration of justice.” Cadman then referred to someone called Subhash who is confined in Egypt with his passport seized “who has knowledge of the workings of the fraud” who he claims Nirav had sent to Egypt and told not to go back to India.

But Montgomery said there were “serious grounds for doubting the credibility of these allegations.”