(From left) Lucas Halmekangas, 7, Tyler Spahr, 2, and Aiden Spahr, 5, all of South Lyon, play football while tailgating with parents outside of the Spartan Stadium on Saturday, Oct. 20, 2018. Junfu Han, Detroit Free Press

Straddling a rock with a can of spray paint in his hand, a young man glanced at his new creation.

On the face of the stone he just marked, there was a colorful message: “Fire Harbaugh!”

It was at that moment last weekend when it sank in for me I was no longer in Alabama, no longer in Tuscaloosa, in a college football stronghold that has been a model of stability for more than 12 years.

I had just entered a different world — one that is far less certain and seemingly more exciting.

My name is Rainer Sabin, and as the newest member of the Detroit Free Press’ sports staff I will be covering Michigan, Michigan State and the Big Ten at large with a focus on football. 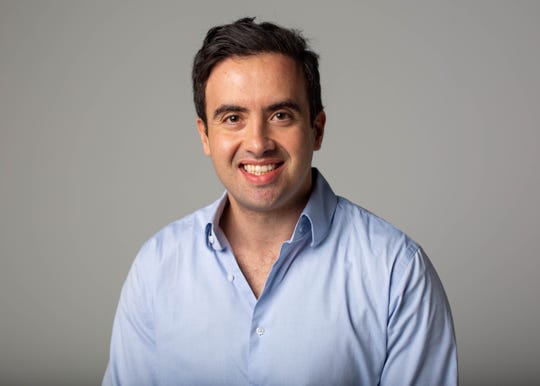 I arrive here at a time when both major programs in this state are faced with questions about their leadership, their placement within the national landscape and their paths forward.

In both Ann Arbor and East Lansing, folks are getting restless as they demand better results and more offensive production.

After spending more than three seasons covering Alabama for AL.com and living among a fan base that celebrated the dominance of a dynasty in living color, the discontent here is noticeable. In the shadow of Schembechler Hall, many are wondering whether Jim Harbaugh has lost his fire and has the vision to make Michigan a perennial contender. Beyond the Duffy Daugherty Building, there are those grumbling about Mark Dantonio’s stubborn allegiance to his assistants and a stale playbook.

In Tuscaloosa, they wear pins with Nick Saban’s face emblazoned on them and pledge their devotion to the Crimson Tide coach with scribbled messages on the windows of off-campus houses. Saban, of course, has achieved far more success than both Harbaugh and Dantonio — winning five national titles since 2009 and fashioning a juggernaut that keeps powering ahead because of exceptional recruiting and the constant investment of ample resources.

But Saban has also cleverly adapted by adjusting his offensive philosophy and cycling through assistant coaches while remaining innovative with personnel evaluation and roster building.

It’s how Alabama, since the start of 2015, has dropped just four games — or one more than Michigan has lost in its last five and Michigan State in its last seven.

Through the prism of what I have witnessed up close in Tuscaloosa, I will observe and analyze the two major college teams in this state. I have seen great football and a program at its apex. 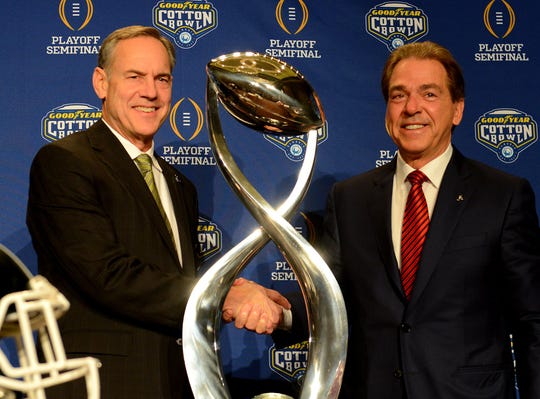 It’s an incredibly high standard established there in the heart of the South.

But if Michigan and Michigan State have designs on competing at a national level, it’s one they must strive to meet.

The fans seem to recognize this.

It’s why on a Saturday in late September a young man decided to release his frustration through a can of spray paint as he called for the ouster of Michigan’s coach.

The words, in his pithy message, screamed loudly — revealing to the world beyond the volatile climate for college football in this state and confirming to one sports writer he’s not in Alabama anymore.