With preseason camp starting this week for most of the country, here come the college football polls.

Two new polls are out this week, and the Michigan football team cracked the top 10 in both.

The Sporting News updated its preseason Top-25 poll on Tuesday, with the Wolverines checking in at No. 10.

“The Wolverines have the ninth-best record among Power 5 teams since Jim Harbaugh arrived at Ann Arbor in 2015, but the only record that gets air time in 0-4,” writes Bill Bender. “Harbaugh still hasn’t beat Ohio State, and the schedule features the same potholes with an early matchup against Army and road trips to Wisconsin and Penn State.

“The hire of offensive coordinator Josh Gattis builds some enthusiasm around quarterback Shea Patterson and a talented group of receivers that includes Donovan Peoples-Jones, Nico Collins and Tarik Black. Dylan McCaffrey might play a role in that success, too. The Wolverines still need to find a running back, and defensive coordinator Don Brown has several pieces to replace on defense.”

Important to note: Michigan was not the highest-ranked Big Ten team in the poll, which had defending conference champion Ohio State No. 4. The Wolverines were picked by the media earlier this month to win the Big Ten, the first that’s happened since 2012. 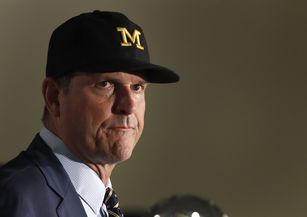 With expectations high, Michigan football keeps to itself

The Wolverines are favorites to win the Big Ten in 2019.

But that also requires Michigan to first win the always-competitive East Division, where OSU, Penn State and Michigan State are all expected to be in the race. Michigan wrapped the 2018 season with a 10-3 overall record and No. 14 ranking in the AP poll.

Over at NCAA.com, Michigan was ranked No. 6 in its preseason Top-25 poll, with writer Wayne Staats declaring this season the one the Wolverines finally beat the Buckeyes.

“The Buckeyes won’t experience much of a drop off with Ryan Day as coach, but with Shea Patterson back and Donovan Peoples-Jones and Nico Collins leading the receivers, the offense should be more explosive,” Staats writes. “The defense might not have as much star power outside CB Lavert Hill, but DC Don Brown is one of the nation’s best.”

Ohio State is No. 3 in the NCAA.com poll, again higher than the Wolverines during the preseason.

Alabama and Clemson make up the first two spots in both polls (though each poll is split on who is No. 1). The Associated Press Top-25 poll is due out Aug. 19, with Michigan set to open its 2019 slate in Ann Arbor Aug. 31 vs. Middle Tennessee State.

Robinson was introduced Monday as the new offensive analyst for the University of Jacksonville football team, it was announced. A Deerfield Beach, Fla., native, Robinson will work with the Football Championship Subdivision program’s offense and assist on special teams.

“He has tremendous experience to draw upon as he enters the coaching profession, from his days at Deerfield Beach here in Florida, on to Michigan and to his time spent in the NFL here with the Jaguars,” Jacksonville coach Ian Shields said in a release.

Robinson played three seasons at Michigan, where he was a first-team All-American as a sophomore and broke Big Ten offensive records. He went on to play four seasons with Jacksonville in the NFL before an injury this spring in the AAF derailed his comeback attempt.

Click below to listen to the latest “Wolverine Confidential” podcast from MLive.

Alabama’s players have begun to return to campus ahead of voluntary workouts starting next week. …