Michigan football’s Donovan Jeter talks about getting back to a conventional game plan and how good Wisconsin running back Jonathan Taylor is.
Orion Sang, Detroit Free Press 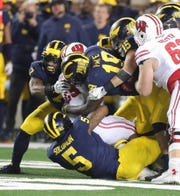 • When Michigan has the ball: The Wolverines cannot afford as many turnovers as they had in their first two games. Fumble away possessions on the road against a ranked team, and they’ll be staring at a loss. The fumbles, pre-snap penalties and missed big plays have to be corrected. Quarterback Shea Patterson says he’s back to full health, which should help. Adding left tackle Jon Runyan Jr. into the lineup will create even more cohesion in pass protection while bolstering the run game. Wisconsin has yet to allow a point this season, ranking at or near the top in nearly every defensive category, including run defense: The Badgers rank No. 2 there, allowing just 20.5 yards per game. Last fall, Michigan rushed 48 times for 320 yards.

• When Wisconsin has the ball: Per usual, the Badgers will seek to establish the run behind a powerful offensive line and All-American running back Jonathan Taylor. First-team All-Big Ten center Tyler Biadasz is one of the best interior linemen in the country, while left tackle Cole Van Lanen was the nation’s highest-graded offensive tackle in 2018, according to Pro Football Focus. New starting quarterback Jack Coan has played well, completing 76.3% of his passes and averaging 9.5 yards per attempt. His rating of 184.3 is the second-highest in the Big Ten. Coan and the passing game, though, are a complement to Taylor and the run game. This could be the most difficult test Michigan’s front seven will face all season.

TAKE THIS: Here’s how Michigan football plans to ‘make a statement’ at Wisconsin

NOT SORRY: Shea Patterson says ‘we’re not going to apologize for being 2-0’

• Taylor, the All-American: In his first two seasons, Taylor averaged 6.9 yards per carry and had 4,171 rushing yards and 29 touchdowns. The most prolific back in the nation, Taylor offers the complete package, with stellar vision, quick feet, can break arm tackles and pick up yards after contact. He has even added to his game since last season. Through two games, Taylor has five receptions for 65 yards and three touchdowns. That’s more receiving yards than he had in all of 2018 and three more touchdowns than his first two seasons combined.

• Solid receiving threats: Coan has plenty of targets. Quintez Cephus leads the team with nine receptions for 169 yards and two touchdowns. A.J. Taylor, Danny Davis and Kendric Pryor have combined for 20 receptions and 224 yards. Tight end Jake Ferguson, meanwhile, has recorded six catches for 69 yards. He led Wisconsin in last year’s loss at Michigan with two receptions for 46 yards and could be targeted off play action.

• Stout defense: Even adjusted for the level of competition — South Florida and Central Michigan — Wisconsin’s defense has played at an elite level. The Badgers rank No. 1 in total defense, allowing just 107.5 yards per game — more than 100 yards a game better than the second-stingiest unit. The secondary is allowing 3.1 yards per pass attempt, while opposing quarterbacks have completed just 43.9% of their throws. Even more impressive: USF and CMU averaged just 0.9 yards per rushing attempt.

Force them to pass: The Wolverines have never really shut down Taylor; even in their convincing win last season, he averaged 5.9 yards per carry. The key for U-M in that game: Stopping Wisconsin’s passing game. On the first drive of the game, the Badgers were stopped at their 46 after a 3-yard completion on third-and-five. The second drive ended similarly: They advanced past midfield, only to punt after an incomplete pass on first down and a sack on third-and-long. Their third and fifth drives, both ending with punts, saw the Badgers unsuccessfully pass the ball in short-yardage situations and second- and third-and-longs. And, of course, Michigan came down with two interceptions. The easiest way to slow down Wisconsin: Force the offense to take the ball out of Taylor’s hands.

Patterson in run game: Michigan broke out its arc zone read package with resounding success against the Badgers last fall, integrating Patterson into the run game. Michigan’s first scoring drive began with an 81-yard run from Patterson — a huge gain that set the tone for the rest of the night. The Wolverines still have that play in their offense, successfully utilizing it against Middle Tennessee State, but Army shut it down. The Badgers will be ready for it, too. If Wisconsin sells out to stop the play, Michigan will have to be ready to counter — or it may find it more difficult to run the ball than it did last fall.

Wisconsin 27, U-M 23: I picked the Wolverines to win this game coming into the season. The rationale then: The offense would find enough big plays to win. Based on the fumbles, penalties and missed big plays thus far, it’s hard to envision that happening.

In major college football, a lot can change in a month. That’s …