Mumbai Rains LIVE Updates: NDRF rescue team arrives at spot where Mahalaxmi Express is held up with 2,000 passengers onboard – Firstpost

Mumbai rains latest updates: A team of National Disaster Response Force arrived at the location where Mahalaxmi Express is held up between Badlapur and Wangani with as many as 2,000 passengers on-board.

Due to heavy rainfall and waterlogging, Mahalaxmi Express is held up between Badlapur and Wangani at KM72 with around 2000 passengers.

Even though the rains have stopped in several parts of Mumbai, areas like King’s Circle, Chembur, Sion, Matunga remained heavily waterlogged on Saturday morning.

An orange alert has been issued for Mumbai, Thane, and Pune on Friday. An orange alert is a signal for authorities to gear up for a situation that might eventually turn severe.

#MumbaiLife rains Nowcast: #MumbaiRains may be heavy in some parts of the city and suburbs in the next 2-4 hours.

It is predicted that heavy to very heavy rain will be seen in Mumbai, Thane, and Raigad. Extremely heavy rainfall is likely at isolated places in Palghar.

“Due to heavy-to-very-heavy rainfall possibility from 27 July, there may be flooding in low-lying areas. Wall collapses in case of old structures cannot be ruled out,” an IMD official told Times of India.

Mumbai and Thane may receive heavy rainfall (64.5 millimetre – 204.4 millimetre) till 28 July. Weathermen said there is a cyclonic circulation over South Gujarat and the neighbourhood and a feeble offshore trough from North Maharashtra coast to Karnataka coast. 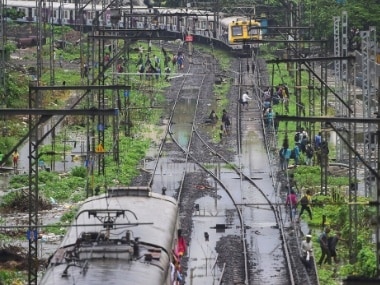 A red alert was issued for 26 and 28 July in Palghar. The alerts intended to signify stages of rough weather, ranging from yellow to orange to red.

IMD in its Friday bulletin said that more than 3 cm rainfall was recorded on Thursday. It also predicted “heavy to very heavy rainfall” during the next five days across Maharashtra.

“Weather Forecast by I.M.D at 08:00 Hours – INTERMITTENT RAIN/SHOWERS WITH HEAVY FALLS IN CITY AND SUBURBS DURING NIGHT/EARLY MORNING,” BMC tweeted.

On Wednesday, the city saw waterlogging and heavy rainfall across the city. On Thursday, Skymet weather and IMD predicted heavy showers for Friday.

The monsoon got active on Tuesday midnight, with the island city recording the highest rain this season of 173mm. “There is a strong monsoon circulation over central and northwest India with the presence of an active monsoon trough slightly to the south of its normal position,” said KS Hosalikar, deputy director-general (meteorology), Regional IMD.

With inputs from ANI.

Mumbai Rains LIVE Updates: NDRF rescue team arrives at spot where Mahalaxmi Express is held up with 2,000 passengers onboard – Firstpost