NEW DELHI: The task force mandated to frame a new income tax law has suggested lowering the tax rate, tracking more financial transactions using technology to widen the base, and retaining some of the exemptions available to middle class investors in a country that lacks social security.

With the government deciding to review the report before making it public, the specific details were not immediately available but the broad direction is to make life simpler for taxpayers by using technology and also use it for improved tracking of transactions on a real-time basis.

In any case, the government has amended the law to remove the Rs 50,000 floor for reporting suspicious transactions, allowing even smaller ones such as cash deposits to be reported to tax authorities. The panel submitted its report to finance minister Nirmala Sitharaman on Monday. 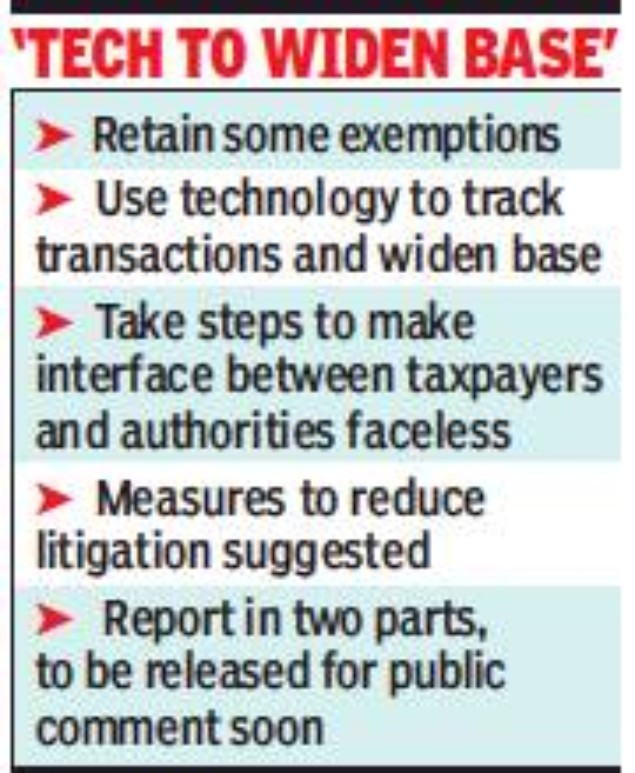 The report proposed that the new Income Tax Act be rolled out from the 2021-22 financial year, sources told TOI.

Task force member G C Srivastava, a retired revenue service officer, said the idea is to make life simpler for taxpayers. “It is a roadmap for IT for I-T. The idea is to increase compliance and widen the tax base,” added tax lawyer Mukesh Patel, who was a member of the task force. He, however, declined to comment on the details.

Sources said the panel has given detailed revenue forecast for the next 5-6 years, factoring in the impact of the changes that have been recommended.

Unlike the last attempt to rewrite the I-T Act 10 years ago, which resulted in two drafts of the Direct Taxes Code being released by the government, the task force has opted to draft an Income Tax Bill which will be released for public comment shortly.

The nomenclature was deliberately chosen as members believed that by calling it DTC, there was scope to include wealth tax and estate duty, which is also an indication that the task force has opted to stick to income tax and corporation tax, suggesting a massive clean-up of a plethora of exemptions and carve-outs that have been given to the corporate sector.

Wiser by the experience of the trashed DTC, which had recommended an across-the-board removal of tax exemptions with a significant lowering of rates, the eight-member task force has opted to make things more palatable as members were of the view that savings for old age were needed in a country like India which does not have a social security net such as the US or Europe.

Experts believe that the government will push the new I-T law as the Narendra Modi administration intends to streamline the direct tax law similar to what it had done on the indirect tax front with the introduction of GST. In fact, Modi had himself proposed redrafting the 58-year-old I-T Act two years ago, which resulted in the formation of the panel.