LONDON: A court here on Wednesday rejected the bail application of fugitive diamantaire Nirav Modi and termed him a flight risk after he was arrested a day earlier from a bank here.

The police’s move came as a surprise for Nirav Modi and his lawyers. He appeared in the Westminster magistrates’ court after spending a night in a police cell on being charged with conspiracy to commit fraud and conspiracy to conceal criminal property.


Nirav Modi was arrested on Tuesday when a teller at Metro Bank in London, where he had gone to open an account, called the police. The arrest was made five days before schedule: his lawyers had arranged for him to be arrested in less dramatic fashion at a police station on Monday, March 25. District judge Marie Mallon remanded him in custody till March 29, when he will appear for a preliminary hearing before chief magistrate Emma Arbuthnot, the same judge who oversaw the Vijay Mallya trial. 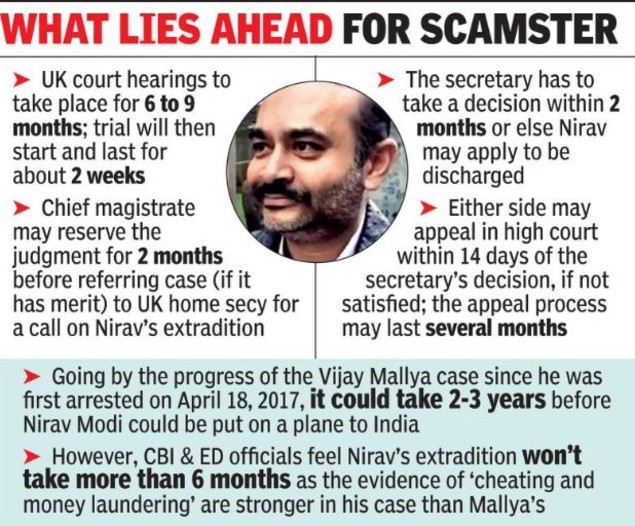 The arrest clears the way for India to start its effort to get the fugitive diamantaire back home and face the law but the return of Modi could be a long-drawn affair.

George Hepburne Scott, extradition barrister representing Nirav Modi, put forward an application for bail of £500,000 (Rs 4.5 crore) and proposed that his client could report to his local police station. “He has done everything he can to be visible to demonstrate his keenness to fully cooperate. He is paying his council tax and has a National Insurance number and he is living openly. He was even written to by the electoral services inviting him to register to vote so officials were fully aware of his address. He has lived at Centre Point over a year. He is the opposite of a flight risk. The home office has one of his passports and the other is with the Driver and Vehicle Licensing Agency (DVLA). His personal assistant, who is in court, can give evidence and once it is back he will surrender it. These are the only travel documents he has,” Scott said.

But Mallon, who had begun the hearing saying she knew nothing about the case, said: “I have taken into account his cooperation and willingness but also this is an exceedingly high-value crime, and you do have access to means to escape and the fact you have every incentive to do so I feel are substantial grounds you will fail to surrender if released on bail.”

In response to media queries regarding the arrest of Nirav Modi, the official spokesperson of the Indian government said in New Delhi: “We welcome the fact that Nirav Modi has been arrested by the UK authorities pursuant to the arrest warrant issued by the Westminster magistrates’ court. Government of India continues to actively follow up this matter with the authorities concerned in the UK, with a view to have Nirav Modi extradited to India at the earliest.”

Jonathan Swain, the barrister representing the Crown Prosecution Service (CPS), on behalf of the Government of India, said the charges related to partnerships, specifically between Diamonds ‘R’ US, Stellar Diamonds and Solar Exports, and the “fraudulent issuing of LoUs (letters of undertaking) in respect of PNB” worth a total of £1.2 billion”. He said “various entities were involved in money laundering but these were all controlled by Nirav Modi who was a partner in all the firms”.

Swain said Modi had been asked to appear in court in India on three dates in February 2018. “He corresponded by email to say he was aware of the case but out of the country and he has not returned to India since. We object to bail. We have substantial grounds to believe he will fail to surrender. This is a high-value crime of sophisticated and extended fraud and Modi has chosen not to return to India so he is deliberately evading justice and because of the high value of this crime, he has access to considerable means that would enable him to fail to surrender,” the prosecutor said.

Modi arrived from the cells and sat in the dock clutching a bunch of papers, dressed in black trousers, a white open-top shirt, with bare feet in black slip-on suede shoes with gold buckles. A police officer sat next to him. He was asked by Mallon if he consented to extradition. He replied in a clear voice: “I do not consent.” He looked at times relaxed, at times overwhelmed. He stood to confirm his date of birth and his address of 42, Centre Point Residences.

Scott said, “He arrived in the UK before any allegations or criminal complaint were made in India. His son is here and has been here for five years at school and Modi is here lawfully. The allegations state that credit facilities were extended from the bank to him and when he tried to obtain further lines of credit the bank was not aware of the existing lines of credit. They claim he obtained them fraudulently and illegally and he strongly contests these allegations.”

“He will argue these are politically motivated allegations, that prison conditions in India will breach his human rights and he will not get a fair trial in India,” Scott added. Another fugitive from India, Vijay Mallya, had argued similarly.

Scott said that Modi had come to the UK in January 2018 because of an “imminent IPO” of his business here. “The brand HQ was going to be in London. When he heard there was a criminal complaint he immediately engaged lawyers in the UK.” Scott then gave a detailed explanation of all the correspondence between his lawyers and the Metropolitan Police extradition unit from February 16, 2018 onwards, explaining that he had “been fully engaging with his lawyers and giving them very detailed instructions and going to meetings”.

Uniformed police officers out of the blue attended the closed Nirav Modi jewellery store in Mayfair on September 5, 2018, which had ceased trading. “Boutique Law then contacted the extradition unit and reiterated his keenness and willingness to cooperate and they said they would be in touch when they were ready.”

Scott argued that Modi had been living openly and visibly in the UK and so would not fail to surrender. “He is a council tax payer, he attends educational courses here and works here.” He said that Modi “worked for Diamond Holdings and earned a salary of £20,000 (about Rs 18 lakh) a month gross and had payslips and an NI number”. “His contract of employment there started on 01/10/2018 signed by Raj Patel,” he said.

The court heard that Modi has residence permits and ID cars for the UAE, Singapore and Hong Jong, most of which have expired. His HK residence card expired in 2016. “The police did not size these, they only took his Indian passport, which has been revoked by the Indian government,” Scott said. He has a second Indian passport, also revoked, currently with the DVLA as he has applied for a driving licence in Britain, Scott said.

Scott told the court that Modi switched lawyers in March 2018 to Anand Doobay from Boutique Law “and has been giving them detailed instructions and going to meetings. He has put a great deal of effort into his preparations. There is a wealth of material in support of his case and of the political motivation of these proceedings, and that is now being prepared,” he said.

In push for self-reliance, defence ministry to put embargo on import of 101 items – Hindustan Times

In push for self-reliance, defence ministry to put embargo on import of 101 items – …