Hours after meeting Parrikar on Tuesday, the Congress chief had told party workers in Kerala that the Goa CM stated that he had nothing to do with the “new (Rafale) deal” that was “orchestrated by Prime Minister Narendra Modi to benefit Anil Ambani“.

In a letter written to Rahul Gandhi, Parrikar wrote, “I feel let down that you have used this visit for your petty political gains. In the 5 minutes that you spent with me, neither did you mention anything about Rafale, nor did we discuss anything related to it.”

He added, “Paying a courtesy visit and then stooping so low as to make false statement for political gain has raised, in my mind, questions about the sincerity and purpose of your visit itself.

“I have said this before and wish to reiterate it again in today’s context too. The fighter aircraft are procured following all stated procedures keeping national security as top priority. 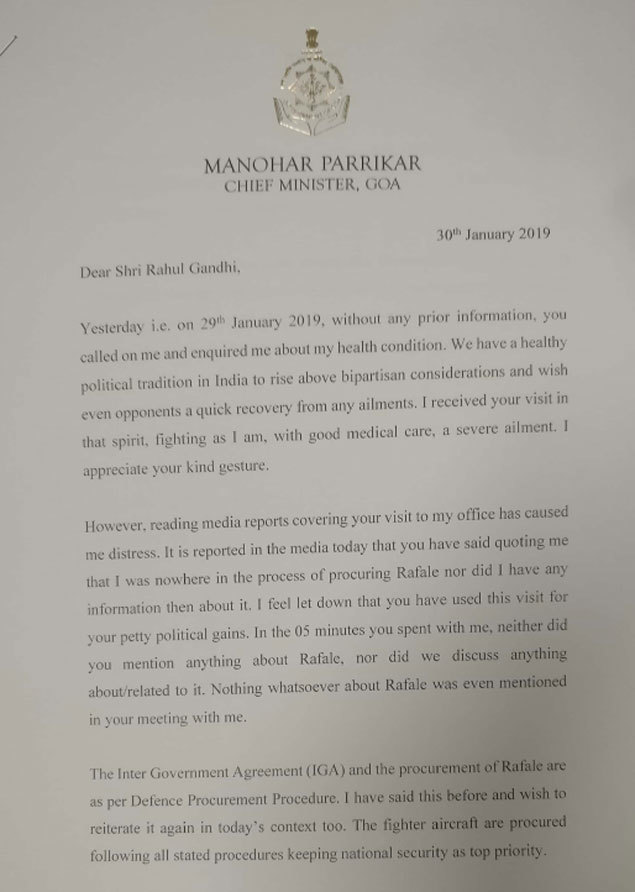 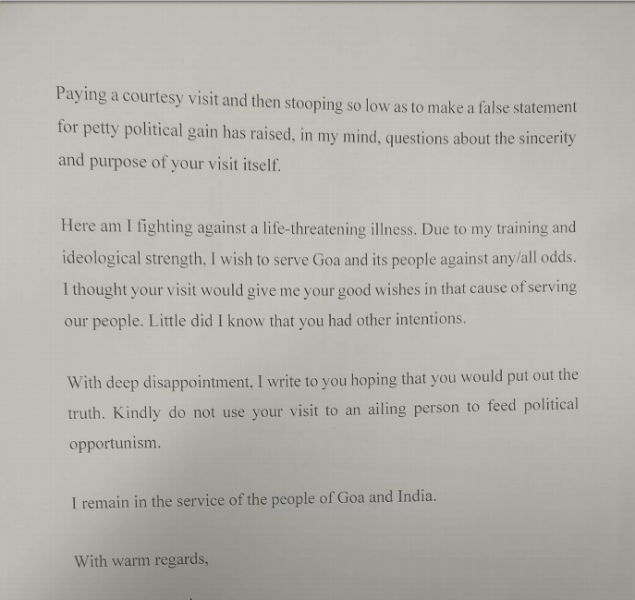 Parrikar, in his letter, urged Rahul Gandhi “to put out the truth”. “Kindly do not use your visit to an ailing person to feed political opportunism,” he said.

BJP president Amit Shah also slammed Rahul Gandhi and accused him of “lying in the name of a person fighting a disease.”

He wrote, “Dear Rahul Gandhi, you showed how insensitive you are, by lying in the name of a person fighting a disease. The people of India are disgusted by your reckless behaviour. In his trademark style, @manoharparrikar ji sets the record straight.”

Dear Rahul Gandhi, you showed how insensitive you are, by lying in the name of a person fighting a disease. The p… https://t.co/uicCsoOX4z

Parrikar, 63, has not been keeping good health since last year due to a pancreatic ailment. He couldn’t attend his office due to frequent hospitalisations.

Gandhi has been relentlessly targetting PM Modi over the deal to purchase Rafale fighter jets from France.

The Congress had released an unverified audio tape last year in which Goa health minister Vishwajeet Rane purportedly told an unidentified person that Parrikar was holding the government to ransom because he was in possession of the Rafale deal files.

Both Parrikar and Rane had dismissed the tapes as fabricated.