Under a section ‘Gender-based Violence as a weapon of war”, the letter from Pakistan mentions a video showing Mr Saini. “Muslim party workers should rejoice in the new provisions. They can now marry the white-skinned women of Kashmir,” the letter quoted him as saying.

Mr Khattar’s remarks, referring to similar comments, were also quoted. “Some people are now saying that as Kashmir is open, brides will be brought from there. But jokes apart, if (the gender) ratio is improved, then there will be right balance in society,” the letter quoted him as saying.

The BJP leaders’ remarks about Kashmiri women were severely criticised by the opposition and rights activists. 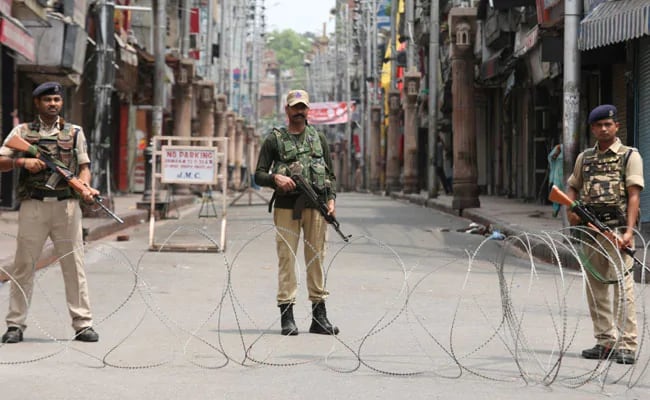 Mayawati had called Mr Khattar’s remarks an example of “mean mentality”. Rahul Gandhi had tweeted: “Haryana CM, Khattar’s comment on Kashmiri women is despicable and shows what years of RSS training does to the mind of a weak, insecure and pathetic man. Women are not assets to be owned by men.”

On Wednesday, the BJP shredded Rahul Gandhi, saying his comments on Kashmir shamed the nation and were “used” by Pakistan.

“The Pakistani application to the UN mentions remarks made by Rahul Gandhi. The application states that acts of violence have been acknowledged by mainstream party leaders such as Rahul Gandhi,” said union minister Prakash Javadekar.

Demanding an apology from Mr Gandhi and the Congress, Mr Javadekar added, “Rahul Gandhi said that things in Jammu and Kashmir were going wrong, there were reports of people dying in J&K. You were wrong, Rahul Gandhi. Things are fine in J&K, there is no violence as you imagined”.

The Congress has called Pakistan’s move a “mischievous” attempt to drag Mr Gandhi’s name into the matter. Mr Gandhi set the record straight in tweets, calling Pakistan a “prime supporter of terrorism”.

“I disagree with this Govt. on many issues. But, let me make this absolutely clear: Kashmir is India’s internal issue & there is no room for Pakistan or any other foreign country to interfere in it,” another tweet read.

Pakistan had threatened to write to the United Nations after the centre’s move earlier this month, ending the special status of Jammu and Kashmir and dividing the state into two Union Territories. Besides flagging the matter on international forums, Pakistan Prime Minister Imran Khan has also shut down train and bus service between the two nations and clamped down on diplomatic relations.

The government has said that Kashmir is a bilateral issue and the scrapping of special status under Article 370 and the state’s bifurcation into two union territories is an internal issue.

On Wednesday, Vice President M Venkaiah Naidu sent a stern warning to Pakistan, saying that India will give a “fitting reply” to those who try to attack the country.