ORLANDO — With its countless mistakes, parade of errors, comedic plot twists and nail-biting tension, No. 8 Florida’s 24-20 win against Miami was the perfect encapsulation of what makes college football both terrible and lovable.

“It was a game filled, like most opening games like this are, with a ton of mistakes from both teams,” said Miami coach Manny Diaz.

It was the fourth quarter of an NFL preseason game, only less coherent, with another significant difference: NFL preseason games clear out early, if they fill at all, while the Camping World Kickoff featured 66,000 fans living and dying with every snap.

There were fake punts — from Florida on the first series of the game, no less, from deep inside the Gators’ own territory. There were fourth-down tries and fourth-down conversions. There were two quarterbacks running for their lives, chased by defenders collapsing through porous offensive lines. Delay of game penalties. False starts.

Florida penalties for pass interference that became Miami’s most productive play call on offense, extending toward the end zone a final drive that never should’ve even crossed midfield. Baffling coaching decisions. Even more baffling work from the referees. Quarterbacks throwing into double coverage. Quarterbacks throwing at defenders. Botched plays on special teams. A missed field goal, of course. It took well over three hours to pass 60 minutes of football time, of which about 12 was spent actually playing football. This was a slightly updated, far more flashy version of college football’s debut 150 years ago: Princeton 6, Rutgers 4. 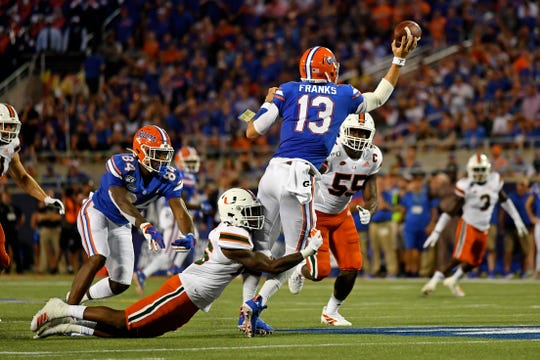 “We’re certainly reminded college football is back,” said Florida coach Dan Mullen, “and it looks like we’re in for another exciting season.”

Yes, college football is back. In terms of general execution, it will get better from here. One thing was clear at halftime: This was not a preview of the College Football Playoff. Miami never pretended to have those expectations heading into Diaz’s debut, especially with the Hurricanes part of a large group of teams in the meaningless race for second place in the ACC. On the other hand, Florida has aspirations of taking that next step in Mullen’s second season, a goal that based on Saturday night is outlandish even by preseason standards.

“I feel like we were fully prepared,” said Florida quarterback Feleipe Franks. “Obviously, I didn’t go out there and try to throw a pick. That’s not what I planned to do. That was not in our game plan.”

The game plan was interesting. Florida dialed up a fake punt four plays into its first series, with 8:10 left in the first quarter and the Gators at their own 36-yard line. Asked afterwards why he felt comfortable taking that chance so early in the game, Mullen implied it was the plan all along. Asked if he would’ve called the same play even closer to his own end zone, Mullen said, “Inside the 10? No.”

In all, Florida attempted four fourth-down conversions and made them all, equaling the number of third-down conversions from both teams. The Gators also committed four turnovers. The two teams combined for 24 penalties for 218 yards. In one series in the second quarter, Miami was penalized for a false start, having too many men on the field and, for good measure, another false start. It wasn’t even the worst series of the game for the Hurricanes’ offensive line.

Miami did debut a new turnover chain, however, calling the new model “Turnover Chain 3.0,” this one made even more blinding by the addition of a bedazzled “305” charm, for the city’s original area code, at its base. It weighs two kilograms, is roughly 10 inches wide, contains nearly 2,000 white sapphire stones and took about three months to complete, the school shared. Miami added in a new piece of jewelry: the “Touchdown Rings,” given to offensive players, are made of orange and green sapphires. 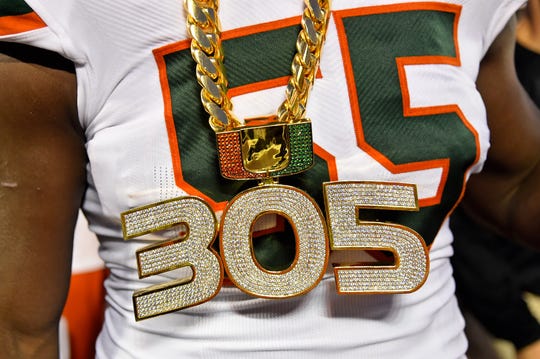 The game’s final series — not counting Florida’s final snap in victory formation — was a masterpiece, somehow spanning 10 plays and more than four minutes but losing yardage: Miami began the drive at Florida’s 25-yard line and ended it at the Gators’ 26. First, an unsportsmanlike conduct penalty to push the Hurricanes back 15 yards. Ten plays, three sacks, three completions, four incompletions, one delay of game and two penalties for pass interference later, Miami was back where it started.

“I must say, honestly, it felt (like) my life clock was going probably at about a thousand times faster,” Mullen said. “I mean, every second was probably like a thousand minutes or days. I don’t know. The last five minutes of the game I think I aged like ten years.”

Yeah, there will be better games than this. There will be better teams than these, even if both will undoubtedly improve: Miami’s youth at quarterback and elsewhere suggests improvement, while Florida can’t play much worse. (Mullen was all smiles postgame, but only because the final result was a bit of a coach’s dream: a rivalry win ugly enough to give him an excuse to get after his team in the two weeks before the Gators’ next game.) In the grand scheme of the chase that defines college football’s season — which teams reach the Playoff — the impact of Florida and Miami doesn’t move the needle.

All of which makes it perfect, of course. As a sport, college football is more often than not a battle of two teams trying everything they can to not out-worse their opponent. There are programs that make it look easy: Clemson, Alabama, Georgia and the like. Even those teams have their moments; the Crimson Tide faked a field goal against Clemson last January and used the kicker as the lead blocker. Most teams have those same moments, over and over again.

And most games are sloppy. Most games defy explanation. It’s because of this sloppiness that games like Florida and Miami are so entertainingly unpredictable — because in the end, after the interceptions and penalties, Miami had the ball deep in Florida territory with a minute left and a chance to win the game. It was a terrible game, and college football kicked off 2019 in midseason form.