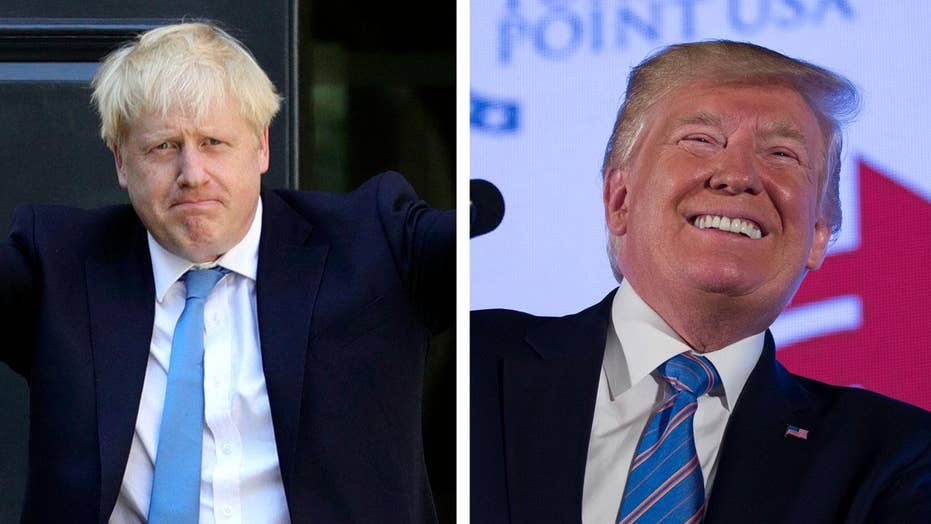 As Boris Johnson takes over as U.K. prime minister, President Trump and his allies in Congress are hoping for relations with America’s closest ally to improve after a rocky few months.

“Well, I think the future has never been brighter for the special relationship,” Rep. George Holding, R-N.C., the ranking Republican of the British American Parliamentary Group and co-chair of the Congressional U.K. Caucus, told Fox News on Thursday.

Johnson replaced former Prime Minister Theresa May on Wednesday after winning the Conservative Party leadership race to succeed her. Johnson has been vocal in recent years with his support both for close relations with the U.S. and his support of Trump.

“[Trump] was voted into office by millions of Americans – not bad people, but on the whole good and kindly people with whom we are connected by old ties of blood and friendship and with whom we have the single most extraordinary economic relationship,” he said in an op-ed last year defending Trump’s visit to the country.

In Parliament on Thursday, in criticizing opposition Labour Party leader Jeremy Corbyn, Johnson said the veteran left-winger “repeatedly sides with the mullahs of Tehran rather than our friends in the United States over what is happening in the Persian Gulf.”

Trump himself has been pushing his close ties with Johnson, particularly on the question of Brexit. Johnson campaigned for Britain’s departure from the E.U. and is likely to have his eye on a much-anticipated and crucial U.S.-U.K. trade deal once it leaves the bloc and can make its own trading agreements.

Johnson has promised to pull Britain out of the bloc at the end of October with or without a deal — a contrast with May, who repeatedly stated the importance of leaving with a deal in place and who allowed Britain’s exit to be delayed multiple times.

Trump backed his boisterous counterpart during the country’s Conservative Party leadership race, and this week compared Johnson to himself.

“He’s a good man, he’s tough and he’s smart,” he said at a Turning Point USA event on Wednesday. “They call him ‘Britain Trump’ and people are saying that’s a good thing.”

It marks a sharp contrast with his recent interactions with May, whom he called “foolish” in her approach to the handling of Brexit and for ignoring his advice to sue the E.U.

“I told [May] how to do that deal, but she went her own foolish way-was unable to get it done,” he tweeted this month. “A disaster.”

In those tweets, he also ripped into Britain’s ambassador to the U.S. Kim Darroch after leaked cables showed Darroch called Trump’s administration “diplomatically clumsy and inept” and said he doubted it would become “substantially more normal.”

“The wacky Ambassador that the U.K. foisted upon the United States is not someone we are thrilled with, a very stupid guy. He should speak to his country, and Prime Minister May, about their failed Brexit negotiation, and not be upset with my criticism of how badly it was handled,” Trump responded.

May backed her ambassador, but Johnson — at a Conservative Party leadership debate — demurred. The morning after the debate, Darroch resigned.

“We don’t want to put the whole special relationship on the edge because of a row about one person. We do not have anything to gain from a running spat with the White House,” an ally of Johnson told The Times of London.

Johnson’s apparent siding with Trump on the issue sparked fury from opposition Labour MPs and with members of his own party, but is likely to have strengthened ties to Trump at a crucial time for U.S.-U.K. relations.

Rep. Holding disagreed with the assertion that the U.S-U.K. relationship had deteriorated under May — “you have good days and you have bad days, but the relationship remains stable” — but said Johnson is “perfectly positioned” to carry the relationship forward with what he described as a positive vision for the country.

Trump is likely to have a good personal relationship with Johnson too. Both were born in New York (Johnson renounced his American citizenship a few years ago) and both bring a populist twang to right-wing politics — known for their dislike of political correctness, a multitude of political controversies and their atypical approach to governing.

Holding said that personal relationships, especially when carving out a deal on trade, can be crucial.

“Often trade agreements falter on ‘little p’ politics, individual politics of different members and their constituencies, but if you have a personal relationship with your colleagues across the pond, then you are better able to see their perspective and their ‘little p’ politics and their constituency and you’re able to overcome the stumbling blocks that often hold up trade deals and get in the way of a more frictionless and seamless relationship,” he said.

The congressman also said his excitement for the future of the special relationship was shared by his colleagues on both sides of the aisle on Capitol Hill.