'You're giving them hope for the future': Detroit students get connected with new laptops – Detroit Free Press 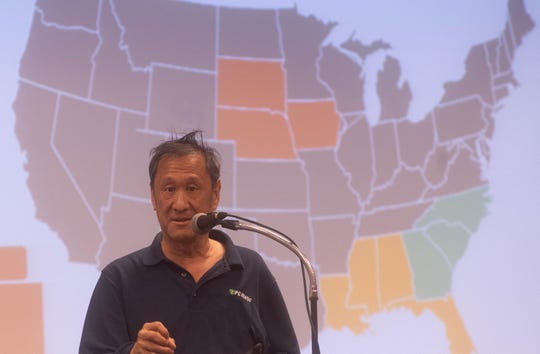 Rob Cheng, the CEO of PC PItstop, maker of PC Matic, speaks at a company event in Sioux City, Iowa on March 15. PC Pitstop is looking to expand its marketing workforce by hiring in Sioux Falls. (Photo: Subbmited)

A computer security software maker is looking to expand, and that starts with growing its workforce into Sioux Falls.

Sioux City, Iowa-based PC Pitstop, which is expanding sales of its PC Matic software, is targeting workforce growth in the Sioux City and Sioux Falls area.

“This particular region will really be the hub for our field sales organization,” said Corey Munson, vice president of global sales and marketing.

PC Pitstop CEO Rob Cheng is a former Gateway executive, and he wanted to hire in the area that made the one-time Sioux City company so successful, said Munson, who worked on Cheng’s team at Gateway.

“Because of our connections to Gateway and because our CEO likes the culture and work ethic of the people who built Gateway into the way it was, if we can leverage that into what we’re doing, he sees that as a big advantage,” he said.

Cheng founded the company 20 years ago with a handful of Gateway employees, focusing on cybersecurity products. The company focused on the home user and small businesses, focusing 90 percent of its marketing budget on prime-time TV advertisements.

“We’ve definitely carved out a niche in the consumer space, especially for what we’ve done through TV,” Munson said. “But the need right now is on the B2B side, it’s those small businesses who are very worried about what could be next for them.”

The fastest-growing portion of the company’s work is providing security software to businesses, governments and particularly schools, through a network of resellers.

“Our intention is to build our field sales organization out, working directly with customers, then routing that business back through resellers,” Munson said.

The company plans to build its workforce as a pilot effort in the Midwest and South Carolina, where Cheng is based.

“As that takes hold, (the plan is to) build that up out into other regions,” Munson said. “I see this as a grassroots approach to developing business. Our intention is not just to be out there selling, but our intention is to be involved in the community.”

For more information about PC Pitstop jobs, go to www.pcpitstop.com/careers.

Watch Dogs is back and this time, it’s hoping across the pond. The latest entry …