Unnao rape case LATEST updates: Uttar Pradesh unit of BJP has claimed that MLA Kuldeep Singh Sengar, accused in the Unnao rape case, was suspended in April 2018. However, it is interesting to note that hardly any media report covered it. When asked, BJP spokesperson Rakesh Tripathi said, “We had not issued any press release then, but I am officially stating this now when you have asked me.”

The Bharatiya Janata Party has suspended MLA Kuldeep Singh Sengar for his alleged connection with the road accident in which the Unnao rape survivor was grievously injured. The Uttar Pradesh party chief Swatantra Dev Singh told ANI, “He was suspended from the party and will stay suspended. CBI inquiry in the case is underway.”

Police on Monday registered a murder case against Sengar, his brother Manoj Singh Sengar and eight others in connection with the road accident in which the Unnao rape survivor and her lawyer were seriously injured, while two of her aunts were killed.

The case has been registered under Sections 302 (murder), 307 (attempt to murder), 506 (criminal intimidation), and 120-B (punishment for criminal conspiracy) of the Indian Penal Code (IPC). 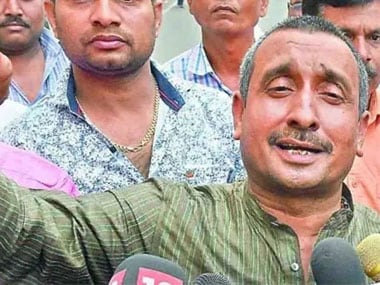 Kuldeep Sengar is the prime accused in the rape case of the minor girl. He is a BJP MLA from Bangarmau in Unnao and was arrested by the CBI in April last year. The teen was allegedly raped by the BJP MLA at his residence in Unnao on 4 June, 2017, where she had gone to seek a job.

When the kin of the survivor complained, her father was booked by the police under the Arms Act on 3 April, 2018, and put in jail after two days. He later died in the hospital and his post-mortem examination report revealed serious injuries on his body.

Police lodged the FIR on the complaint of Mahesh Singh, the husband of Pushpa Singh, who died in the mishap along with another aunt of the Unnao rape survivor. She and her lawyer were critically injured and are currently under treatment at a hospital in Lucknow.

The accident took place on Sunday when the survivor was on her way to Raebareli from Unnao. The vehicle in which she, her two aunts and lawyer were travelling collided with a truck. While two of the survivor’s aunts succumbed after the accident, she and her lawyer are grievously injured.

The accident sparked outrage, with many wondering if the accident was staged. “What is the BJP waiting for? Why has this man not been expelled from their party even when his name is in the latest FIR in the Unnao Rape Case,” the Congress party’s general secretary for eastern Uttar Pradesh, Priyanka Gandhi Vadra asked in a tweet.

“So a woman is allegedly raped by a BJP MLA. Her father is beaten up and dies in custody. A key witness dies mysteriously last year. Now her aunt who was also a witness is killed and her lawyer is critically injured in an accident caused by a truck with blackened number plates,” she had said in her earlier tweet.

Samajwadi Party (SP) chief Akhilesh Yadav demanded that the road accident of Unnao rape survivor be probed by CBI and asked for the rape accused BJP legislator to be shifted to a jail outside Uttar Pradesh.

West Bengal Chief Minister Mamata Banerjee too joined the chorus of Opposition leaders demanding a high power inquiry into the accident in which the Unnao rape survivor suffered critical injuries while two of her relatives lost their lives. The Trinamool Congress (TMC) chief also attacked the BJP government for defaming the governance of West Bengal instead of focusing on its own party-ruled Uttar Pradesh.

Six Congress MPs on Monday gave Adjournment Motion in the Lok Sabha over the lawlessness showed by the Uttar Pradesh government in connection with the accident of the Unnao rape survivor. The Central Bureau of Investigation CBI had filed a charge sheet against Sengar in July last year and booked him under Sections 120B, 363, 366, 376(1), 506 of the Indian Penal Code (IPC) and also under relevant sections of Protection of Children from Sexual Offences Act (POSCO) Act.