SportsPulse: They are always talked about but really have nothing to show for it. For Michigan and Notre Dame, winning this weekend will go a long way for them to be taken seriously.
USA TODAY

The quest for college football’s ultimate prize continues. Three showdowns among teams in the top 15 and some key conference clashes in Power Five leagues highlight the Week 4 slate.

Here are the five games that will have the biggest impact on the playoff race.

Playoff prognosticators have had this game circled since the schedules were finalized. The Fighting Irish cracked the final foursome last year thanks to an unblemished regular season record. They might have a case if this visit to Athens is their lone setback and Georgia goes on to win the SEC title, but they certainly don’t want to test that theory since they’d need a few other breaks as well. The Bulldogs will have other opportunities ahead for resume-boosting wins, but a victory here wouldn’t hurt.

After faltering a bit at the beginning of the season opener against Louisville, Fighting Irish QB Ian Book and Co. were much sharper in last week’s romp past New Mexico. WRs Chase Claypool and Javon McKinley could have opportunities against the Bulldogs’ fast though somewhat inexperienced secondary, but Georgia LBs Channing Tindall and Jermaine Johnson will do their best to make sure Book doesn’t have time to find them. The Bulldogs have faced little adversity in their three games thus far, with the slight exception of a few stalled drives at Vanderbilt in Week 1. Fighting Irish S Alohi Gilman has a nose for the ball, but he’s going to need help from the young LB group in front of him to keep UGa QB Jake Fromm and RB D’Andre Swift from generating long marches.

This is the first true heavyweight bout in the quest for the Big Ten title. These two are in opposite divisions, so a loss wouldn’t be fatal. Nevertheless, neither wants to get off on the wrong foot with so many pivotal league contests still to come.

Both teams enter this contest following an open date. The Badgers rolled into their week off after outscoring their first two opponents by a combined margin of 110-0 as QB Jack Coan and RB Jonathan Taylor established the tone quickly. They’re unlikely to maintain their lofty 65.4% conversion rate on third down against LB Khaleke Hudson and the more accomplished Wolverines defense, but their ability to avoid miscues thus far is encouraging. Michigan was last seen eking out an overtime win against a determined Army squad, and presumably used the time off to address some offensive issues. Freshman RB Zach Charbonnet has been a bright spot, but getting past LB Chris Orr and Wisconsin’s strong front seven could be difficult if QB Shea Patterson is unable to stretch the field. The possible return of WR Donovan Peoples-Jones from a foot injury would help, but is status remains uncertain.

No single game is a true eliminator in the SEC West. But the team that winds up on the short end of this clash would have a steep and likely insurmountable hill to climb in the division. The Aggies, who already took a non-conference loss at Clemson, must get this win at home to retain any hope of pushing back into the College Football Playoff conversation.

QB Kellen Mond and the Aggies offense took full advantage of last week’s tune-up against Lamar. Perhaps the biggest benefit was getting freshman RB Isaiah Spiller some work, since he’ll likely be the primary ball carrier with Jashaun Corbin out for the year with a hamstring injury sustained at Clemson. Big gainers could be difficult against DE Marlon Davidson and the excellent Auburn front line. Though Tigers QB Bo Nix hit the big pass he needed to get past Oregon in Week 1, he remains a work in progress with his unit still seeking consistency. RB JaTarvious Whitlow has emerged as the featured back, averaging 5.3 yards per carry. He’ll have the attention of Buddy Johnson and the Aggies LB corps. 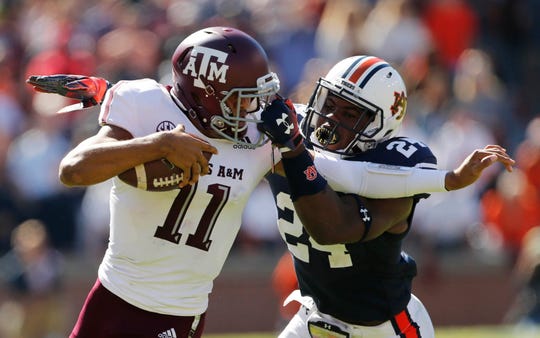 Oklahoma State at No. 13 Texas

Oklahoma, which has this weekend off, remains the team to beat in the Big 12 based on recent history and this year’s early results. Prevailing wisdom still says the Longhorns, LSU result notwithstanding, are the primary challengers to the Sooners. The Cowboys, however, would alter that perception considerably if they can get a ‘W’ in Austin.

After struggling to slow Joe Burrow and the Bayou Bengals a couple of weeks ago, the Longhorns could be in for their share of track meets as they negotiate the Big 12 slate. First up is Cowboys freshman QB Spencer Sanders, who benefits from throwing to standout WR Tylan Wallace and also has RB Chuba Hubbard in his backfield. Texas, of course, can counter with fiery veteran Sam Ehlinger, who is a constant deep threat regardless of down and distance. His arsenal includes WR Devin Duvernay and RB Keaontay Ingram.

No. 11 Utah at Southern California

A week ago, this Pac-12 South showdown looked like it would decide the division. It still might, but USC’s overtime setback at BYU, where incidentally the Utes earned a dominant win in Week 1, prevented it from being the week’s fourth Top 25 matchup. Even so, it’s a game the Utes need to win as they embark on a difficult opening stretch in Pac-12 competition.

Trojans freshman QB Kedon Slovis has a promising career ahead of him. His talent has shown already, but so did his inexperience last week. The Utah defense, the stingiest in the Pac-12 anchored by LB Devin Lloyd, will do its best to force a few more miscues. The Utes aren’t flashy on offense, but it is devastatingly efficient with veteran QB Tyler Huntley and RB Zack Moss working behind a sound interior line. The USC defense, led by S Talanoa Hufanga and LB John Houston, must get third-down stops at every opportunity.