In the first moments of the life of the Islamic Emirate of Afghanistan, Muhammad Najibullah Ahmadzai was dragged out of the United Nations compound where he had taken sanctuary. Then, that morning of 27 September, 1996, he was beaten to death, but not before someone pulled out a knife and severed his genitals. His bloodied body was dragged behind a truck, and then hung from a traffic light for the edification of the passing public.

According to Glyn Davies, the United States spokesman, the violation of the United Nations’ sovereign protections in Kabul, and Najibullah’s murder, were merely “regrettable”. There was “nothing objectionable” about the new regime; its Shari’a-based regime was, he promised, was only “anti-modern”, not “anti-Western”.

In time, Davies went on, the US hoped the Taliban would “form a representative interim government that can begin the process of reconciliation nationwide”.

President Donald Trump is reading again from that official spokesperson’s script. In return for power, Trump hopes, the Taliban will accept ceasefire that will allow the US to withdraw from the war it began after the terror attacks of 11 September, 2001. There’s a catch though: Should the Taliban renege on a peace deal, and put Afghan cities to the sword, as it did in 1996, the president could be left facing public-relations ruination.

This week, Trump has been romancing Prime Minister Imran Khan and his masters in Pakistan’s military, with desi wedding optics that have bewildered many. Behind the warm hugs, though, there are cold, family interests.

Islamabad has long held that the Taliban comprises ethnic-Pashtun nationalists, not global jihadists, who would be willing to allow women’s rights, democracy and political pluralism. Trump is demanding that Islamabad makes sure the Taliban learns this script before any guests arrive. 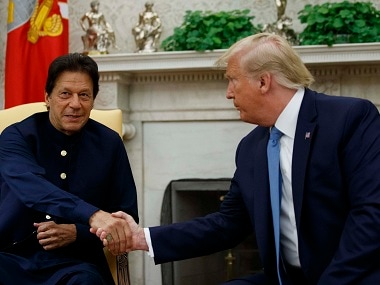 From the Doha Accord — the roadmap for peace talks signed early this month — it’s clear the Taliban isn’t on board, at least not yet. The English version of the accord assures Afghan women of their fundamental “rights in political, social, economic, educational, cultural affairs”. But the Pashtu version — that the Taliban insists is the official one — has no reference to women’s rights at all. The English and Dari versions of the Doha Accord do not have any mention of the withdrawal of foreign forces as a precondition for peace. The Pashtu version does.

Perhaps worse, the parties have agreed to “institutionalise [an] Islamic system in the country for the implementation of comprehensive peace”. This clearly suggests Afghanistan’s existing constitutional system, that claims to be based on religious principles, will be overthrown. In the Taliban’s view, moreover, an “Islamic system”.

This shouldn’t surprise anyone. Following a dialogue in Moscow early this year, a Taliban statement described the current Afghan constitution as “un-Islamic”, and labelled women’s rights “immoral”. And Taliban chief Haibatullah Akhundzada vowed in an Eid message to continue fighting until “ending the occupation and establishment of an Islamic system”.

Little imagination is needed to see why the Taliban isn’t willing to embrace a republican system. From a recent report from United Nations experts, among other sources, we know the Taliban works closely with global jihadist groups like Al-Qaeda, along with Pakistan’s Lashkar-e-Taiba. Younger Taliban commanders, ideologically committed to the global jihad, see anything short of total power in Afghanistan as a betrayal .

In large parts of Afghanistan, moreover, Taliban shadow governments already rule — their power cemented with generous revenue from narcotics trafficking and taxes on businesses. Few young commanders see sense in giving up that power for arrangements governed by legal norms, in which elections can change fortunes overnight.

Taliban greybeards like Abdul Gani Baradar, the outfit’s key negotiator in Doha would like to see the organisation leave politics altogether: Now that god has “given victory in the political and military fields,” he said, “instead of a desire for power, they should think about service to Islam”. Among younger commanders not provided apartments and businesses in Qatar, that isn’t a popular opinion.

Zalmay Khalilzad — Trump’s Afghanistan policy czar — has, in the course of his long career, demonstrated formidable talent for defending the indefensible. Khalilzad has made clear to Trump that the ISI alone can coerce the Taliban into sticking with whatever deal it makes, at least until his re-election campaign is out of the way. Faced with crippling financial pressures, Islamabad has reason to cooperate — though no-one is sure if it actually has the power to enforce its wishes on the Taliban.

Either way, history suggests, this story doesn’t have a happy ending. In 1994, the administration of Bill Clinton had sought accommodation with the Taliban, hoping to facilitate energy giant Unocal’s efforts to build an ambitious pipeline linking Central Asia’s vast energy fields with the Indian Ocean.

Muhammad Ghaus, the Taliban’s foreign minister, led an expenses-paid delegation to Unocal’s headquarters in Sugarland, Texas, at the end of 1997. The clerics, housed at a five-star hotel, were taken to see the NASA museum, several supermarkets and the local zoo.

In April 1996, Robin Raphel — then Assistant Secretary of State for South Asia, and later Barack Obama’s ambassador for non-military aid to Pakistan, visited Kabul to lobby for the project.

Later that year, she was again in Kabul, this time calling on the international community to “engage the Taliban”. Raphael later had these words for sceptics: “The Taliban does not seek to export Islam, only to liberate Afghanistan”.

Few believe these remarks were made in ignorance. In a 1998 report, Physicians for Human Rights documented the Islamic Emirate’s war against Afghanistan’s women: The closing down of schools, the denial of medical care facilities, public floggings and institutionalised child-rape. It noted that men faced “extortion, arrest, gang rape, and abuse in detention because of their ethnicity or presumed political views”.

Even as the a State Department report described the Taliban’s guest, Osama bin Laden as one of the “most significant sponsors of terrorism today”, the regime was never declared a State sponsor of terrorism.

“The truth”, former secretary of state Madeleine Albright later wrote, “was that those [attacks before 9/11] were happening overseas and while there were Americans who died, they were not thousands and it did not happen on US soil”.

In 1996, oil lubricated the road to carnage; this time, it’s terror. Both China and Russia are also backing the Taliban, hoping it will take on the Islamic State, as well as Chechen and ethnic-Uighur jihadists. For India, this is bad news. In return for Islamabad using its influence with the Taliban, it will, most certainly, demand a price: An end to the international pressure it has been facing to shut down jihadist groups operating against India.

Prime Minister Narendra Modi has cautioned Trump of the risks of allowing a free pass on India in return for a peace deal with the Taliban. India’s decision to strike across the Line of Control earlier this year was, among other things, a warning to Western capitals of the potential Pakistan-based terrorism has to spark off a crisis with global consequences.

There are no good outcomes for the rest of the world from this deal, either. As the Taliban’s Islamic Emirate rises again in Afghanistan, jihadist movements, the global jihadist movement will find a homeland, as it did before 9/11. In the event the Taliban does act against global jihadists, many in its own ranks will defect to the Islamic State — an outcome that will still give jihadists safe-havens.

Islamabad, alone, has reason to coyly encourage Trump’s overtures: His retreat from Kabul will be gift for General Qamar Javed Bajwa, bringing untold wealth to the country, just as 9/11 was for General Pervez Musharraf.