Karnataka Assembly has become an experimental lab for BJP Karnataka, said former chief minister and Congress-JDS coalition leader in Karnataka Siddaramaiah. Taking to Twitter, Siddaramaiah accused the BJP of trying unconstitutional ways to form the new government in Karnataka. “In what article of the constitution is the governor allowed to permit the party to form govt that doesn’t have majority? It is shame!!” Siddaramaiah tweeted. The former JD(S) leader further said that BJP has the strength of 105 in Karnataka Assembly, which is way less than the half way mark. “In no way BJP can form the govt if constitution is followed. This only proves that BJP has no belief in the democratic values.”

The BJP has confirmed that the full Cabinet will mostly not be sworn in today. According to reports, only BS Yeddyurappa will be taking oath today at 6 pm along with a small team, BJP leaders have indicated.

Karnataka units of both, the Congress and the BJP, launched online attacks on each other within minutes of the announcement that BS Yeddyurappa will be taking oath as the new chief minister at 6 pm today. State BJP unit tweeted: “As instructed by our national president Shri @AmitShah ji & working president of @BJP4India Shri @JPNadda ji, Shri @BSYBJP has met his Excellency Governor of Karnataka to stake claim to form government.@BSYBJP will take oath as CM of Karnataka today at 6 pm.”

Reacting to BJP staking claim to form new government and BS Yeddyurappa swearing-in as the new chief minister, Congress Karnataka MLA DK Shivakumar said, “It’s up to them what they do next — the BJP and the rebels. I’ve heard BJP will parade all 15 MLAs. All I can say about the MLAs is that it appears they are “the most satisfied” of the lot.”

The letter that the Chief Minister-designate BS Yeddyurappa sent to Govenor Vajubhai Vala requesting him to allow the swearing-in for the new Karnataka chief minister between 6 – 6.15 pm today (Friday). Heavy security has been deployed across Bengaluru ahead of the oath-taking ceremony.

The letter says, “… I intend to state that after the present Government headed by Sri HD Kumaraswamy has lost the vote of confidence in the Legislative Assembly and consequently he resigned to the post of Chief Minister… I submit that I am the leader of BJP Legislature Party and also the Leader of Opposition in the Assembly. At present the strength of the BJP MLAs is 105 and the single largest party in the Assembly.” The letter further adds, “I may be invited to form alternate government today itself and I will take oath as Chief Minister of Karnataka at Raj Bhavan between 6.00 pm and 6.15 pm.”

Karnataka Governor Vajubhai Vala has given Yeddyurappa assent to stake claim to form government in the state and he will be sworn in as the state Chief Minister at 6 pm today.

The development comes three days after the JD(S)-Congress coalition government lost a trust vote on the floor of the state legislative Assembly. Yeddyurappa, who has been elected to the post of chief minister three times, said he would request the Governor to let him take oath as chief minister today. “Will request permission to hold oath-taking ceremony today itself,” he said.

The new Karnataka government will be formed today, senior BJP leader and former chief minister BS Yeddyrupappa has confirmed. Speaking to media on Thursday, Yeddyurappa said that he will meet Governor Vajubhai Vala at 10 am on Thursday to stake claim to form the new government. “I am going to meet the Governor today at 10am to stake claim to form the government and I will request him to hold oath ceremony today itself.”

Karnataka Assembly speaker K R Ramesh Kumar on Thursday disqualified three rebel Congress MLAs under the anti-defection law, in a move that heightened the suspense over government formation excercise in the state two days after the collapse of the Congress-JDS ministry.

With all attention riveted on the Speaker’s action, Kumar held that the resignation by the three MLAs were “not voluntary and genuiune” and therefore proceeded to disqualify them under the anti-defection law with immediate effect till the end of the term of the current House in 2023. 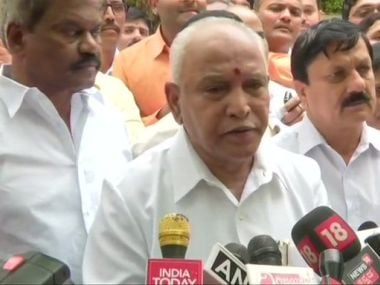 Former Karnataka CM BS Yeddyurappa told media that he will meet Governor at 10 am to stake claim to form government.

The Speaker said he would decide on both resignations and disqualification pleas pending before him in respect of 14 other MLAs “in the next couple of days”, which may prolong the political turmoil and have a bearing on government formation.

The 14-month-old Congress-JDS coalition government headed by H D Kumaraswamy collapsed on Tuesday after losing the vote of confidence in the assembly in a climax to the three-week long intense power struggle triggered by the raft of resignations by the rebel MLAs.

Kumar’s pronouncement of the ruling on disqualification pleas by the Congress and JDS and resignations by the MLAs in a phased manner is seen as a tough message to other rebels, who are still camping in Mumbai insisting they would not step back from their decision to quit their assembly membership.

Congress rebel MLAs Ramesh Jarkiholi, Mahesh Kumatalli and Shankar faced the tough action from the Speaker, who made it clear that a member disqualified under the anti-defection law cannot contest or get elected till the end of the term of the present House.

“They have violated the provisions of the 10th Schedule of the Constitution (anti-defection law) and therefore are disqualified,” he told reporters here.

They cease to be members from “this day” till the expiry of the current assembly in 2023, the Speaker added.

Since Shankar, who was earlier recognised as an Independent in the assembly, had ‘merged’ his party KPJP with Congress, he also faced the action as its member based on the petition by the Congress seeking his disqualification, Kumar explained.

He said resignation was a “respectable terminology”, while disqualification was “admonishing,” while emphasising that the anti-defection law could not be used as a “monstrous law.”

“No by-election…nothing will work…this is a quasi judicial body (speaker’s office),” Kumar said, adding, “I know these matters will go to the court.”

On the remaining 14 cases, he said he is “holding them back” and it would require a “couple of days” for him to give his verdict.

Kumar said he first decided on the resignation, rejecting them as they were not voluntary and genuine “based on circumstances” and thereafter dealt with disqualification after considering “evidences and other orders.”

Asked if the same yardstick would be used against other rebel MLAs, he said, “wait and see.”

“It is a hypothetical question,” Kumar said, when asked whether the remaining MLAs could still come around and withdraw their resignation.

He said “It is the responsibility of all political parties that such impasse doesn’t continue and Constitutional crisis is not created and to see that the finance bill is passed.”

The speaker had earlier said that if the Finance bill was not passed by July 31, the “government will come to a standstill and we will not be in a position to even pay salaries, such a necessity has come, what to do?”

Asked if the Finance Bill can be passed by a presidential order if government is not formed by July 31, he said it cannot be done and either the suspension of the assembly or the invocation of President rule has to be done.

“I don’t know what the calculations or the thought process of the Government of India is,” he added.

Asked if the non-passage of the finance bill would lead to “financial anarchy”, he said, “we are nearing a crisis.”

With their resignations still pending, the 15 rebel MLAs of the Congress and the JD(S) had on Wednesday sought four weeks’ time to appear before the Speaker in connection with the plea for their disqualification from the state assembly.

A bench headed by Chief Justice Ranjan Gogoi in its order on Wednesday last gave the Assembly Speaker the freedom to decide on the resignation of the 15 MLAs within such time-frame as considered appropriate by him.

The Congress and the JD(S) had sought disqualification under the anti-defection law of the rebel lawmakers who, however, were undeterred by it and skipped the assembly proceedings during the crucial confidence vote Tuesday.

Meanwhile, as it looked to the central leadership to take a shot at government formation, the BJP camp here was devoid of any major activity barring internal meetings held by party state unit chief B S Yeddyurappa, who is waiting in the wings for a fourth term as chief minister.

Rebel Congress MLA Shivaram Hebbar, who returned home from Mumbai, where the disgruntled lawmakers were holed up, expressed confidence that the speaker who is a senior and experienced person will take right decision on their resignation.

Speaking to local news channels in Yellapuram in Uttara Kannada district, he said “we (rebel MLAs) are not disgruntled, we are helpless. As no one came to help us we came out.”

Responding to a question, he said, he does not fear about disqualification and will face it.

He also said they will take decision on their political future only after the resignations are accepted.

Caretaker Chief Minister H D Kumaraswamy said no one can give a stable government in the state in the present political scene.

Senior Congress leader and former Chief Minister Siddaramaiah rubbished reports he had instigated the rebels to resign and destabilise the coalition government.

Cautioning media houses against peddling “false news”, Siddaramaiah said he would give them a befiting reply if they repeat the allegation in front of him.

According to sources, Siddaramaiah has said that if the government is not formed by July 30 there will be political uncertainty, which may pave the way for mid-term polls, and asked leaders to focus on facing such an eventuality.

The Supreme Court on Thursday allowed two Independent MLAs from Karnataka to withdraw their plea seeking a direction to the assembly speaker to conduct “forthwith” a floor test on the H D Kumaraswamy government’s trust move.

A bench headed by Chief Justice Ranjan Gogoi took note of the submissions of the senior lawyers representing Speaker K R Ramesh Kumar and Kumaraswamy that they have no objection to the withdrawal of the petition and allowed it on the ground it has become infructuous after Tuesday evening’s floor test.

The Kumaraswamy government lost the vote by 95-105 in a House with an effective strength of 205 members.